The light tank T-26 was created in the early 1930s on the basis of the English tank Vickers Mk.E. The tank was intended to directly support the infantry. Produced in several versions from 1931 to 1941. Also on its basis, a number of special machines and self-propelled artillery mounts were created, which were not widely used. In total, from 1931 to 1941, about 11,218 units of tanks of various modifications and configurations were manufactured. It is considered the most massive tank of the Red Army in the prewar years. 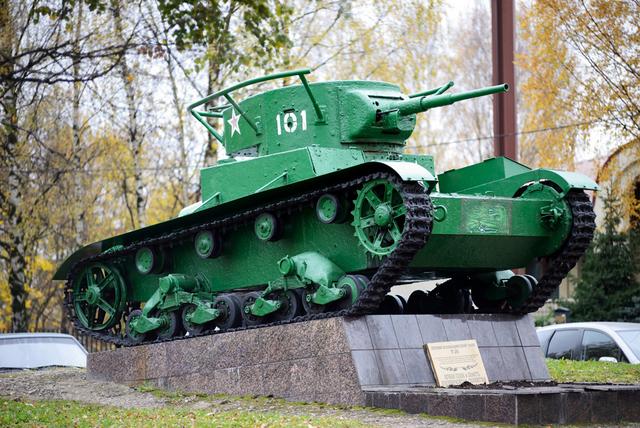 On February 13, 1931, by a resolution of the USSR Revolutionary Military Council, the Vickers-26 tank was adopted by the Red Army under the T-26 index. Its production was supposed to be deployed at the Chelyabinsk Tractor Plant under construction, then at the Stalingrad (also under construction), and at the last it was planned to create a special workshop capable of producing up to 10 thousand tanks a year in wartime. But in the end, we stopped at the Bolshevik Leningrad plant, which already had experience in tank building. Design work on the preparation of serial production, as well as all further work on the modernization of the tank, was carried out under the guidance of S. A. Ginzburg. 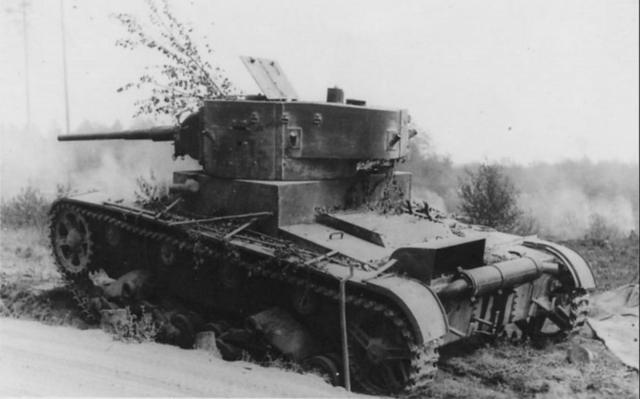 In August 1931, the Defense Committee adopted a decree on a tank building program in wartime conditions. In accordance with it, during the first year of the war, the factories were to produce 13,800 T-26 tanks. Already in February, the plan was reduced to 300 units, with the condition that the first tank be delivered no later than May 1. But this turned out to be unrealistic. In the spring of 1931 there was only preparation for mass production of the T-26 using a temporary bypass technology. In parallel, the assembly of two reference machines. The working drawings were mostly completed by May 1, and on June 16 the process was approved. The factory began manufacturing tools and accessories for serial production. The assembly of the first ten serial T-26s with non-armored steel bodies was completed in the summer of 1931. In autumn, full-fledged production vehicles began to leave the factory buildings. 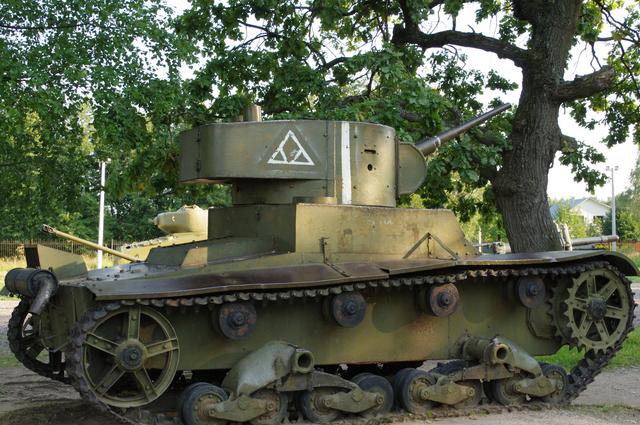 In February 1932, on the basis of the tank production of the Bolshevik factory, a new factory No. 174 was organized. K.K. Sirken, and chief designer – S.A. Ginzburg. Despite all these measures, the 1932 plan could not be implemented. Back in April, K.K. Sirken reported that the lag behind the tank assembly schedule was mainly due to the fault of allies who delayed the supply of components and assemblies. In addition, the latter were of extremely poor quality. For engines, the marriage rate reached 88%, and for armored vehicles – up to 41%. In 1932, plant number 174 manufactured 1,410 tanks, presented 1361 for delivery, and the troops accepted only 950. A similar picture was observed in the future. Nevertheless, until the second half of 1941, 11,218 tanks left the factory workshops. 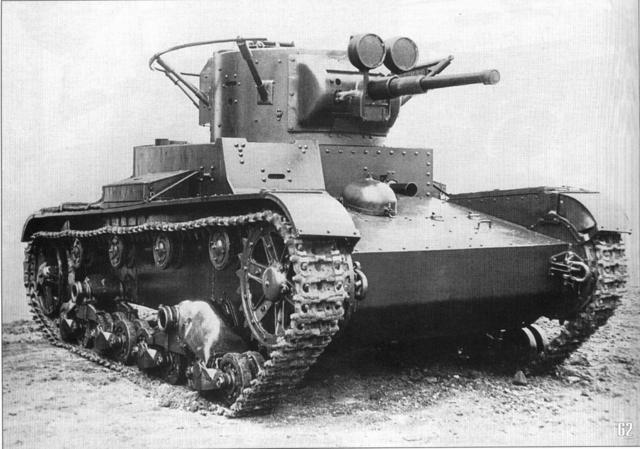 During the production period, the tank was modernized and improved several times. The Soviet light tank T-26 has the following modifications: 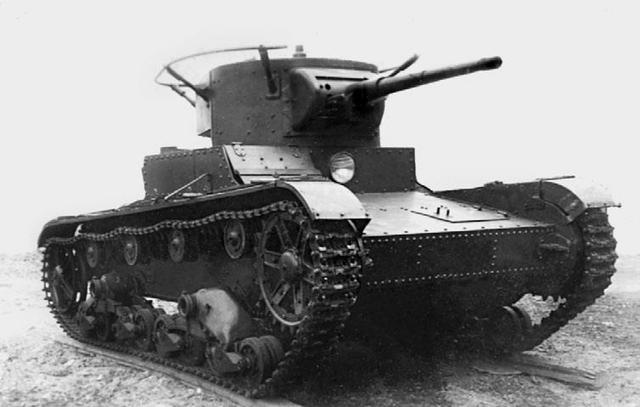 The first tank formation to receive the T 26 was the 1st mechanized brigade named after K.B. Kalinovsky (MBO). Machines that entered the troops before the end of 1931 had no weapons and were intended mainly for training. Their more or less normal operation began only in 1932. At the same time, the new staff of the mechanized brigade was approved, according to which it should have included 178 T 26 tanks. The formation of other mechanized brigades also began in this state. 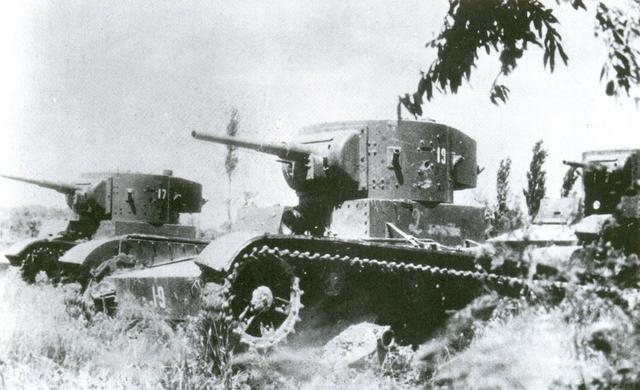 The study and generalization of the experience of the exercises conducted in 1931-1932, revealed the need to create even larger compounds. After a preliminary study of this issue, the Headquarters of the Red Army (as the General Staff was called in those years) developed the organizational staff structure of the mechanized corps. Their formation began in the autumn of 1932 in the Moscow, Ukrainian and Leningrad military districts. The body included two mechanized brigades, one of which was armed with T 26 tanks, and the other – BT. Since 1935, the mechanized corps began to arm themselves only with BT tanks. 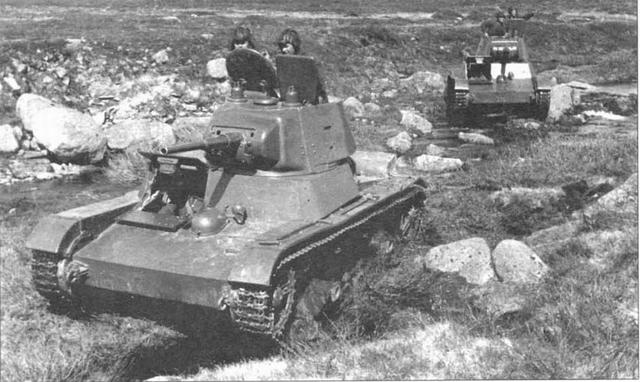 From the moment of receipt in the troops of T 26 arr. 1933, a mixed platoon consisting of one single-turret and two tower tanks became typical in mechanized brigades for some time. However, as the troops were saturated with single-tower tanks, two tower vehicles were mainly transferred to training battle parks. As well as tank battalions of infantry divisions. By the beginning of 1935, the tank battalion of the rifle division consisted of three tank companies of 15 T 26 each. In August 1938, mechanized corps, brigades, and regiments were converted into tank ones. By the end of 1938, the Red Army had 17 easily tank brigades of 267 T 26 tanks each and three chemical tank brigades, also equipped with chemical tanks based on the T 26. 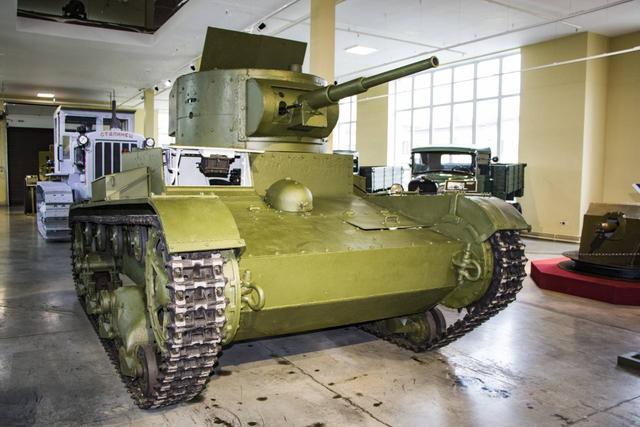 In the online game world of tanks, a Soviet light tank of the second level. It has medium speed and thin armor. Thanks to its powerful weapons and good dynamics, it can work perfectly both from shelter at medium and near distances.

In battle, the tank shows itself well in the role of a sniper, being in shelter and defending the base from the enemy, and in the role of a support tank, easily circling the enemy and showering him with shells. In no case should you engage in close combat with the numerical superiority of the enemy – you won’t be able to “swirl” everyone. Avoid sniper duels in open space – the advantage in accuracy does not compensate for weak armor and large dimensions.

There are several tactics on the Soviet light tank T-26. One of the best battle tactics is equipping a tank with a 45 mm 20K gun. Thanks to the 45 mm 20K and 37 mm ZiS-19 guns, you can do good, stable damage to enemies. Due to the high penetration that this gun has. Good maneuverability and dynamics allow you to quickly inflict damage and move to a safe position. The armor of the T-26 leaves much to be desired, the forehead of the hull does not withstand shells of even semi-automatic guns. So it’s better to stay close to your armored allies. Which will be able to take damage, giving you the opportunity to strike back.

Another option for battle tactics. Due to the short length, you can hide behind any shelter, leaving only a tower for enemy fire. However, the T-26 is difficult to hide in the bushes due to the high height of the hull. But if there is a camouflage net, camouflage or the skill “Disguise”, there are much more chances to go unnoticed. The gun is better to put 37 mm ZiS-19 because of its high accuracy and the ability to successfully shoot long distances.