In a new part of the story, we have to help living souls who cannot leave the living world. Moreover, this story is a continuation of the search for the right parts from the “Curtain Divider”.

The quest begins on a ghost ship. Where the pirates go when they die in battle. Something like a save point, and then on the ship itself the doors open and you can continue the game. Well, this part of the location could not do without a built-in mission.

In order to start a new part of the passage, you need to take the diary, which is located next to the ferryman of this ship. In a conversation with the ferryman, it turns out that during his life he owned a powerful artifact that made it possible for the living to look at the worlds of the dead. And after his death, this artifact was buried with him.

The first task is to find his tomb with an artifact.

On the first page is a hint about a lantern that provides knowledge. And the location of the Krakenbane Island and the Faithful Old Man Island. 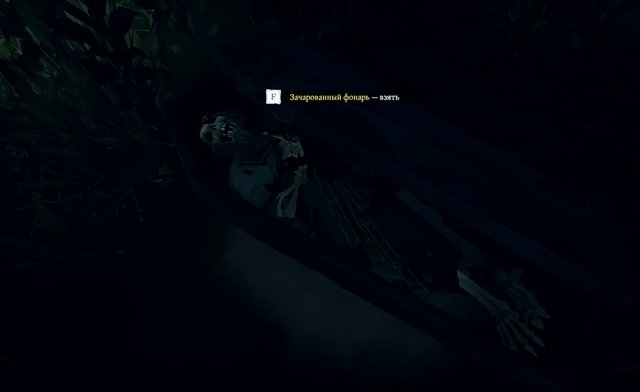 Once on the island “Kraken’s Ruin” you need to go to the very top of the island to a lonely tree. And next to it should be a barrel. At this point, you need to start digging to get the grave of the Ferryman. In it you will need to take the “Enchanted Lantern”.

The first part is the fate of the “Morning Star” “Shards of the Past.”

This “Enchanted Lantern” allows you to see souls and their traces of movement when turned on. And when the flashlight is off, souls disappear. But they appear again when the Enchanted Lantern is on. 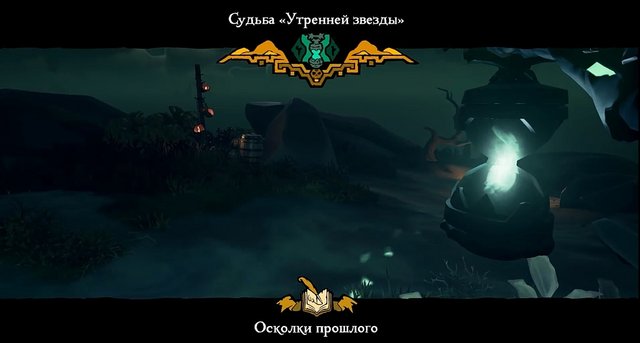 Further stay on the Krakenbane Island is over. Since it was necessary to take on it only this “Enchanted Lantern”. And the further island was to be indicated in the diary. Below is a solution to the problem.

Further in the game there is a technical error.

We watched and read the diary more than once. We ran several times along the island of “Kraken ruin” with the “Enchanted Lantern” on. And they didn’t find anything.  the closest clue was the name of the island “Faithful Old Man”.

And so his search was not so simple. Since the islands “Faithful Old Man” on the global map simply do not exist. We even tried to shine the “Enchanted Lantern” global map itself. And it did not give any results. So further passage was not possible.

This technical error is not the correct name of the island itself. And most likely this happened due to Russian localization. We managed to solve this riddle. Here are just solutions to the solution occurred outside the game.

On the island of “Old Servant”.

Once you are on the island, you must immediately turn on the “Enchanted Lantern” and then you can see the souls of dead people. Which in the past committed certain actions.

The action on the island with “Enchanted Lantern” takes place as if in an animated film. With small segments and intervals of their actions. But, by these actions, the picture of what is happening becomes clear.

So, already on the shore you can see how two skeletons are chasing someone and indicate the place of those people whom they are trying to catch.

Climbing a little higher up the mountain, we see three pirates near the bonfire. Who notice the pursuit of them. After which they themselves rush into the race. And in the footsteps of the earth will have to look for their location and their bodies. In this case, the tracks are interrupted, as the fleeing pirates run and jump. 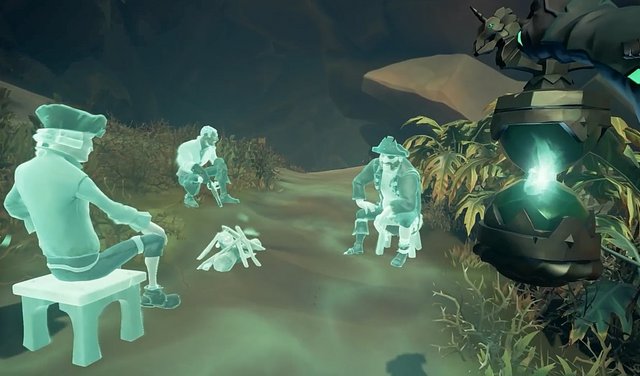 A pirate who runs to the right.

If you go after the pirate who ran to the right side, then you can run into a site in the rock. On this rock you need to climb the stones lying nearby. And then he jumps off a cliff. And you need to do the same process. A little below there is a ledge of stone on which you can jump. And the fall occurs without damage. 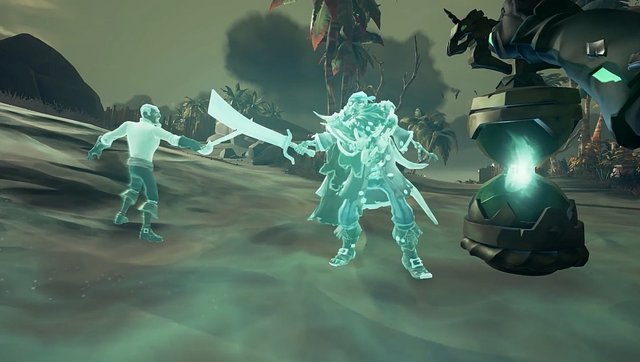 At the end of his journey, a fleeing pirate will meet with the main pirate skeleton. With whom he will fight and lose the battle. After which the main skeleton will carry it on itself and carry it to its subordinate skeletons.

With the help of “Enchanted Lantern”, we can observe how from a dead pirate, they take something and put it in a chest. And next to them is a map. You need to go north, to the top of the island. There is the first chest that you can dig in the same place. The dug up chest should be carried to your ship. 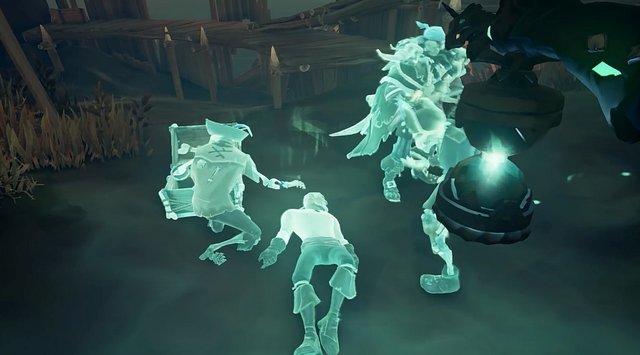 After taking the chest to the ship, you need to return to this place and follow in the footsteps of another skeleton. To find the key to the chest.

The pirates who ran to the left.

Closer to the top of the mountain, the pirates disperse. And one of them is found by skeletons and shot and he falls down from a cliff. In the future, you will need to go down to this pirate. There will be two skeletons, something to collect from it and put in a chest. 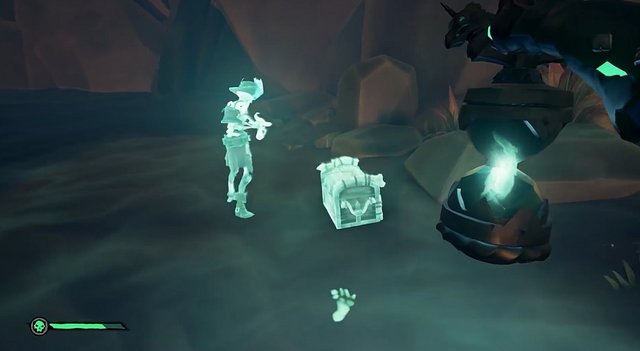 Below will be the same picture, they put something in a chest of pirates. If you go for a skeleton with one leg, then he will lead to the top of the mountain. Where is the gun. There he put the key and fired air.

The gun will need to be installed in exactly the same way as seen with the Enchanted Lantern. After that, you can climb into the gun and shoot. You have to find yourself in the sea, and at the bottom of the sea is the key to one chest. 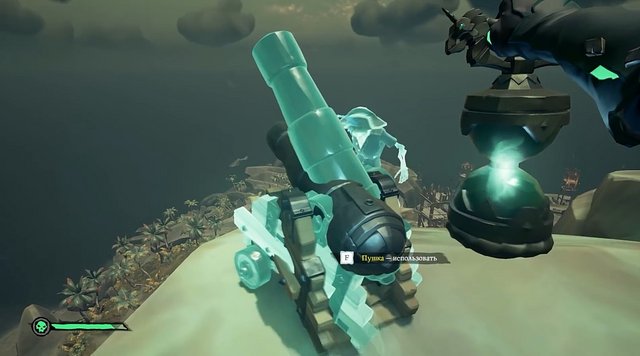 In the footsteps of another skeleton, one can find another chest. That pirate who fell from a cliff.

In the wake of the third pirate.

In the footsteps of the third pirate, who ran to the left side of the site of the murder of the second pirate. It will be possible to see how the skeletons shoot him, and then they also take something from him and put him in a chest.

Skeletons with both feet visible on the ground carry a chest. And at the end of it, you need to dig out this chest and take it to the ship.

And the other skeleton, which has one leg, will indicate the place of the buzz; he threw out the key to one chest.

About found and open chests.

When all the chests are found and open, the souls of the pirates will be free. And you will need to return to the ship “Morning Star” to the “Ferryman”. And for this, your character will need to die. Once on the ship, which controls the “Ferryman” you will find the very souls that saved. 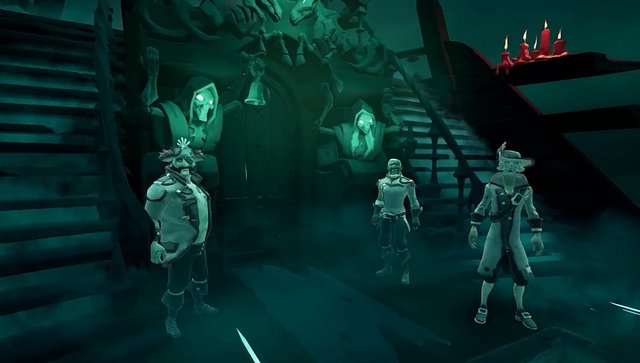 On this story, the “fate of the Morning Star” is considered over.

The Ferryman will be glad that his Enchanted Lantern was returned to him. And he will tell about who invented and created all these curses. He is the lord of the Gray Bone skeletons. And he himself wants to be the owner of the Golden Shores. 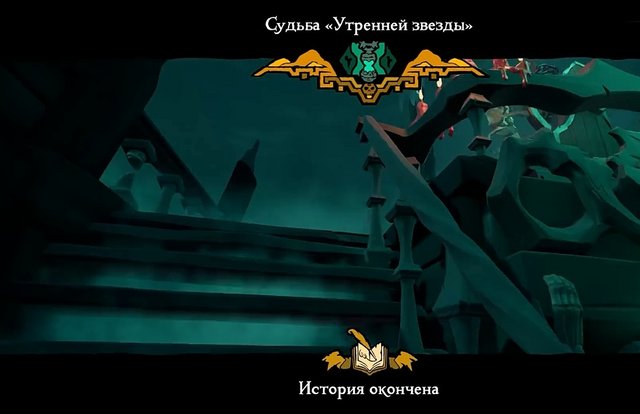 The skeleton master “Gray Bone” will captivate the souls of those who go against him. And subsequently, these souls can not enter the ferry and return back to revenge it.

The Ferryman shows us the place of the next story and chapter. Where to find the skeleton leader “Gray Bone”. And for this you will need to go to the island of Steel Tooth and talk with the shipbuilder and find out where the Morning Star is located.