During the spring of 1939, intensive training was conducted by German crews who mastered the Pz.35 (t) tanks, coming both from the former Czechoslovak warehouses and from the enterprises at which they underwent repairs and re-equipment. By the end of the summer, the 11th Tank Regiment and the 65th Tank Battalion were fully staffed with equipment, including headquarters units and a reserve. The 65th battalion joined the 11th tank regiment as its third battalion, and the regiment itself was part of the 1st Wehrmacht light division (1.Leichte Division). 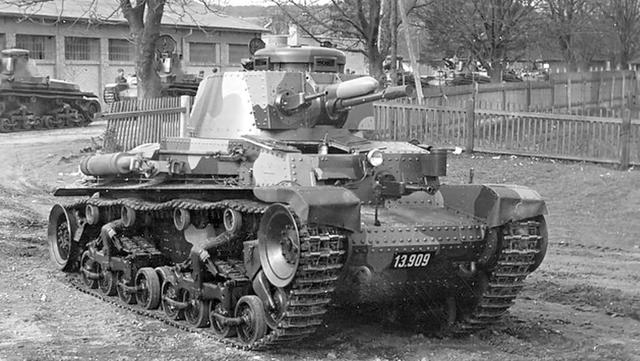 On the eve of the Polish campaign there were 112 Pz.35 (t) and eight Pz.Bef.Wg.35 (t) tanks, as well as 65 Pz.II and 41 Pz.IV. The 1st I Light and 13th Motorized Divisions formed the 14th Corps of the 10th Field Army Army Group South. It should be noted that, compared with the entire German tank fleet, there were few Czech machines, but they were almost one third of the number of tanks armed with cannons from 37 mm and above.

On September 1, 1939, the Pz.35 (t) tanks of the 1st battalion of the 11th tank regiment supported the attack of the 4th cavalry regiment on the position of the Polish infantry in the Veluni area. The active actions of the 1st light division, coupled with the strikes of dive bombers, allowed the Poles to quickly break the resistance. Within a day, units of the 1st Light Division attacked the bridgeheads on the right bank of the r. Warta. During these battles, Polish anti-tank artillery hit one Pz.35 (t) tank. After building the pontoon bridge across the Wart, the 65th tank battalion and the 1st battalion of the 4th cavalry regiment were transferred to the other side. At the same time, the German units suffered serious losses from the fire of Polish heavy artillery. 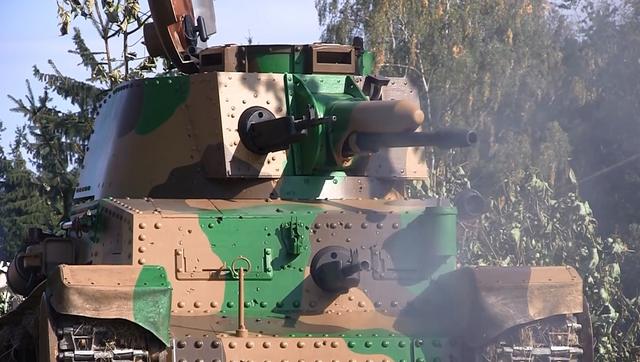 On 6 September, the Fon Ravenstein combat group (apparently named for the commander — this was often practiced by the Wehrmacht) was singled out from the 1st Light Division for pursuing Polish troops that had withdrawn from the Czestochowa area to the Vistula. On the afternoon of September 8, units of the 1st light division entered the Radom. On the outskirts of the city, the Pz.35 (t) tanks had to endure a battle with tankettes and armored vehicles from the 33rd tank division of the Vilna cavalry brigade. The 65th tank battalion led heavy battles with scattered Polish units in the forests near Radom. Particularly dangerous for tanks were well disguised Polish anti-tank guns. Their fire in these battles destroyed and damaged several German tanks.

On September 14, the 1 st Light Division was included in the 15 th Light Corps and transferred to the area of ​​heavy fighting on the Bzura River to the west and south west of Warsaw. Already on September 16, the advance units of the 1st light division cut the Warsaw-Modlin highway. It was in this area that the most curious episode occurred during the hostilities of this compound during the period of the Polish company. On September 18, at the crossroads of forest roads, the outposts of the 1st company of the 65th tank battalion were ambushed. Polish anti-tank guns and a TKS wedge, armed with a 20 mm gun, from the 71st tank division of the Wielkopolska cavalry brigade destroyed three tanks Pz.35 (t), including the tank of the company commander. Apparently, these were the largest losses of the 1st light division in one battle. 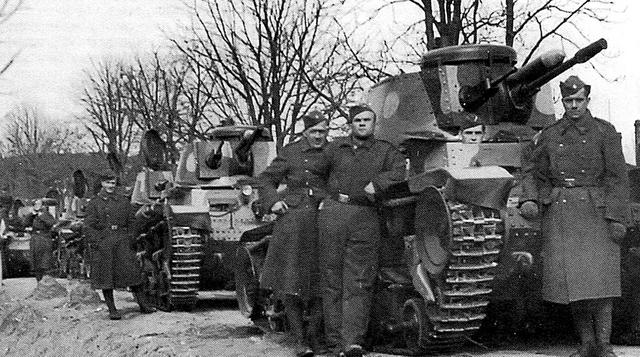 In total, during the Polish campaign, the division lost 22 officers, 37 noncommissioned officers and 165 privates. 11 Pz.35 (t) tanks were destroyed, eight of which were repaired.
At the end of hostilities, units of the 1st light division returned to the place of permanent deployment. Here, on October 18, the deployment of the 6th tank division began on its basis. In January 1940, the 6 th tank was transferred to the Bonn area, and a month later – to Vasterwald. In the spring of 1940, divisional exercises were held. In April, the division relocated to Mayen. By this time, there were 118 Pz.35 (t) and 10 Pz.Bef.Wg.35 (t) in the 11 m tank regiment. All cars were repaired at the enterprises of Škoda and were fully equipped and combat ready. 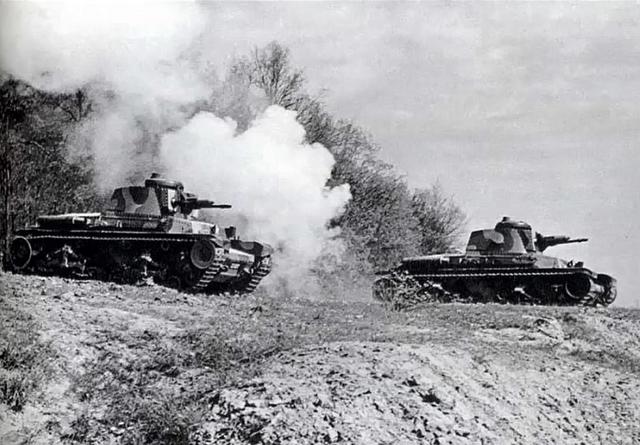 During the French campaign, the 6th Panzer Division was part of the 41st Panzer Corps. May 12, she crossed the border of France. After breaking through the Maginot Line, with the support of artillery and aviation, he forced the Meuse, and the next day, May 16, p. Oise u Gyunza. This is where the first encounter with the French tanks occurred. The 37 mm Pz.35 (t) cannon could effectively deal with light tanks Renault and Hotchkiss (R35 / 39/40 and H35 / 39), but they were powerless against medium and heavy S35, D2 and B1 vehicles. Here artillery and aviation entered the business. During the offensive in Belgium and France, the 6th Panzer Division covered 350 km. In the twenties of May 6 I tank division fought mainly with the British troops. Having defeated the 36th British Infantry Brigade, the German tanks attacked the headquarters of the British Expeditionary Force (BEF). On May 26, the 6th tank, in turn, counterattacked 145 I British infantry brigade. On this day, Pz.35 (t) again encountered in a head-on battle with English tanks. 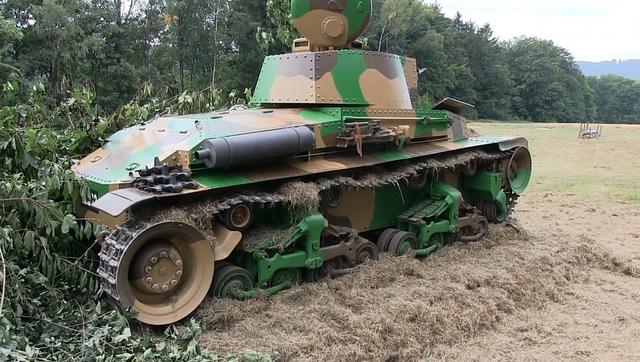 At the end of May, the division was redeployed to the south and incorporated into the tank group of General G. Guderian, and on May 30 they were taken to the reserve for eight days for replenishment and rest. By this time, the 6th Panzer Division had destroyed about 60 tanks, five armored vehicles, ten guns, 11 anti-tank guns, eight artillery tractors, 34 cars and 233 trucks.

On 10 June, the division re-entered the battle, forcing Enu in the area of ​​Rethel, and then fighting in Champagne. On May 15, the tanks of the 6th division crossed the Marne-Rhine Canal. On 21 June, in cooperation with the units of the 1st Tank Division, they captured fortifications in the Epinali area. The participation of the 6th Panzer Division in the French campaign was over. During the fighting, 15 Pz.35 (t) tanks were destroyed, 12 of which were subsequently repaired at the Škoda plant. 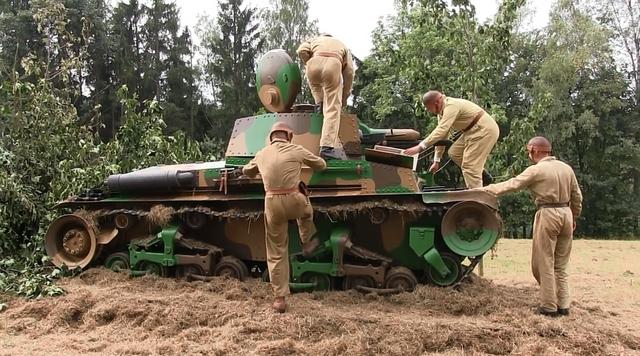 After the end of hostilities, the division was transferred to Germany, to the proving ground at Aris. By June 1941, there were 149 Pz.35 (t) and 11 Pz.Bef.Wg.35 (t) tanks in the 6th Panzer Division. She was in the composition of the so-called first-line compounds, that is, the most complete and combat-ready.