After the Nazis came to power and the intensified militarization that began in Germany, the Czechoslovak government took a number of steps to increase the country’s defense capability. As part of the process of improving the ground forces, the main efforts were focused on the formation of new armored units and equipping them with more modern equipment.

The development of the tank company was engaged in Škoda in 1935. The Czechoslovak Ministry of Defense decided that the Š II a tank, which had already received the army designation LT vz.35, would be manufactured at the factories of both companies. However, the military did not even suspect that the scandal was nothing but a dramatization, since there was a secret agreement between the two firms on mutual assistance in the production of weapons. With regard to tanks, this meant that the volume of their production at both firms should be equal.

Production of LT vz.35 tanks at Škoda’s plants was carried out from December 21, 1936 to April 8, 1938. The company ČKD handled its part of the order within one year 1937. He was in service with the Czechoslovak army under the designation LT vz. 35

In accordance with the classification adopted in the Czechoslovak army, light tanks of category II a were intended for operations as part of cavalry units, but only together with infantry. In general, it almost corresponded to the English class cruising tanks.

The tank hull was assembled from rolled armor plates on the frame from the corners with the help of rivets. The maximum thickness of the front sheets was 25 mm, which provided protection against 20 mm of armor-piercing shells of the Oerlikon cannon at distances of 250 m and more.

The crew was located in the control section in the front of the hull; this is a driver mechanic and a radio operator shooter. The workplace of the driver mechanic was located on the right. In front of him in the front sheet of the podashennoy box there was a viewing window with dimensions of 390×90 mm with 50 mm triplex glass block. Outside, it was closed with 28 mm armor cap. To observe the terrain at the disposal of the driver, there was a viewing slot 120×3 mm in size in the right front side plate of the case, also covered with 50 mm bulletproof glass from the inside. The observation hatch had also a gunner’s radio operator, though of a much smaller size – 150×75 mm. In the center of the frontal sheet, a ball mount of a course machine gun was mounted, which allowed firing over the horizon in the sector of 30 °. The elevation angle was + 25 °, the declination was 10 °. The machine gun telescopic sight was built into the driver’s mechanic’s observation device. True, firing was possible only with the lid of the viewing device open. The driver mechanic could shoot a machine gun course, after fixing it in the center position. The descent was carried out with the help of a cable Bowden.

The tower was located above the middle part of the tank hull, forming with it a fighting compartment. As well as the body, it was riveted on the frame of the corners. The diameter of the tower shoulder strap in the light was 1267 mm.

The armament of the LT vz.35 tank was a very powerful weapon for its time and class. Its basis was 37 mm gun vz. 34UV (factory designation of the company Škoda – A3), which was a KPUV vz.34 anti-tank cannon converted for installation into a tank. The gun was equipped with a semi-automatic wedge bolt, which ensured a high rate of fire of 12–15 shots / min. The length of the barrel was 39 calibers (1448 mm). The mass of the gun – 235 kg.

During the occupation of the Czech Republic, the German army, captured LT vz.35 tanks received the name Pz.Kpfw. 35 (t) and entered service with the Wehrmacht. The first cars with German soldiers appeared in Milovitsy early in the morning on March 15, 1939. Within a month, 244 confiscated Czechoslovak tanks LT vz.35 were prepared for shipment to Germany. Renamed tank Pz.Kpfw. 35 (t) significantly superior to light tanks of the German army. And in the name of Pz.Kpfw. 35 (t) the letter (t) meant that the tank was Czech.

Many tanks entered service with the 11th Tank Regiment (11.Panzer Regiment) in Paderborn and the 65th Tank Battalion (65.Panzer Abteilung) in Sennelagen.

The tanks were somewhat modified in accordance with the standards of the German army. First of all, the Germans installed their radio stations Fu 2 or Fu 5, which worked in a telephone mode. They also replaced the rather primitive internal lamp signaling with a tank intercom. And a number of other introductions to electrical equipment.

Tanks Pz.Kpfw. 35 (t) were actively used until the end of 1941 as part of the German 1st Light Division, and after its re-formation – the 6th Panzer Division. A total of 434 cars were produced. 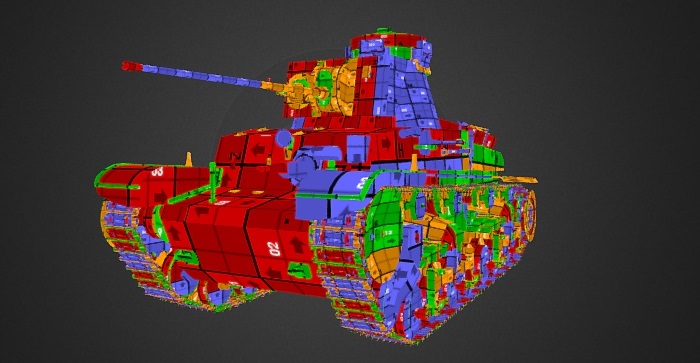 In the online game World of tanks German tank Pz.Kpfw. 35 (t) is at level 2. The tank is quite comfortable and interesting. Among his classmates may well have a serious resistance when properly applied. With medium and close distances in support of the allies.