In Wasteland 3, it will be difficult for one ranger to survive, as on the way to achieving the tasks you will have to face dangerous opponents in combat battles. To cope with all the problems in Colorado, you need to assemble a team of good rangers. Each of the rangers has the ability to develop and improve their characteristics. 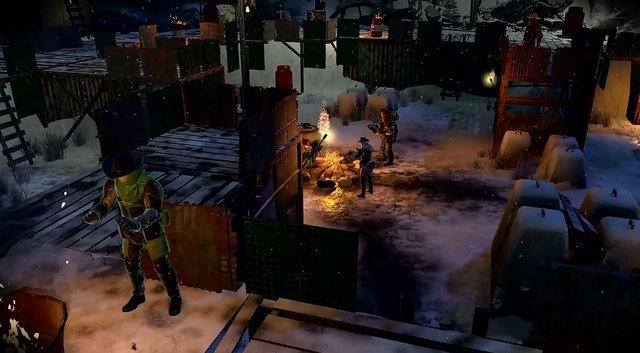 At the beginning of the game, a newbie may find himself in a dead end when choosing character enhancements and may get stuck in the development tree for a while. In total, a team can have up to 6 characters and several additional companions. Depending on the style of play, you need to decide on the roles of the main characters and distribute pumping points.

It is best to assemble a combined ranger squad with different types of weapons. Since there may not be enough cartridges for everyone if they shoot with the same type of weapon. Based on this, the squad should have tanks, snipers, arrows and support. Distribute the group members into combat fighters and support, this way it will be easier to play. For example, the main rangers are fighters who go on campaigns, it is better to pump their fighting qualities. Rangers – it is better to leave support at the base and pump them through the directions associated with support, with the exception of the field medic. 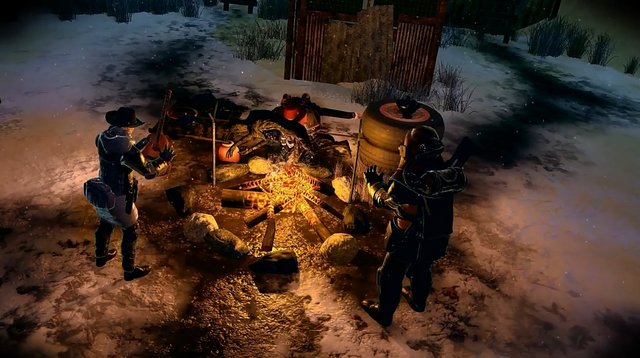 Features of characters in Wasteland 3.

When choosing a feature for a character, you need to understand that giving the character priority in one thing, he still receives extra penalties to his characteristics. Only one character can be distinguished by one feature. Moreover, if you are in doubt and do not know how you can play, then it is better not to choose a feature, such a function is present in the game. 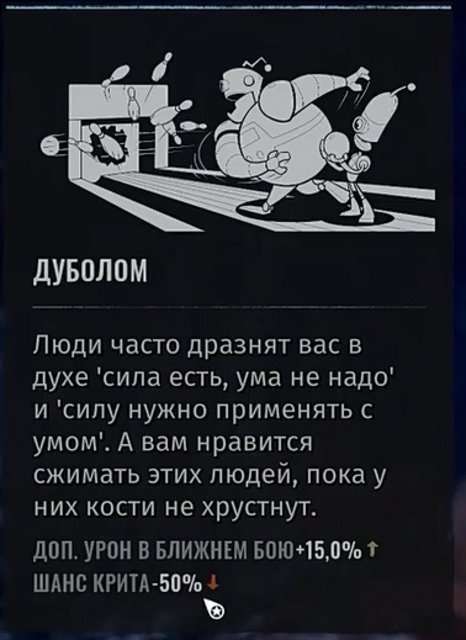 Grants additional melee damage by 15%. But, it reduces the chances of a critical attack by -50%.

With this feature, the character can hold first positions and deal normal attacks by 15%. It is important to pump strength, and in battle do not forget to support other fighters. 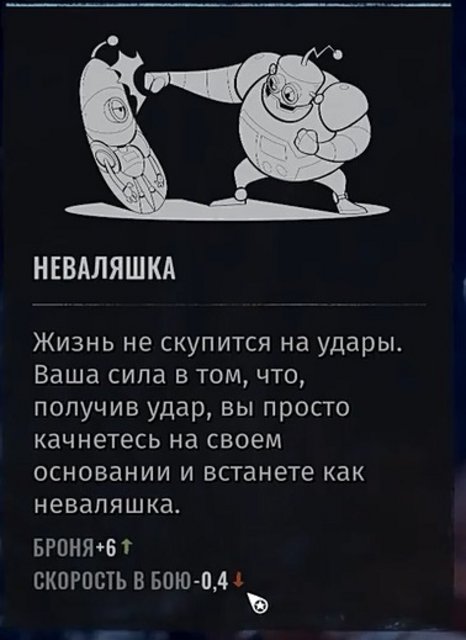 It can be suitable for any characters if you increase the speed indicators with other pumpings. The speed penalty itself is not so significant and you can comfortably continue the game. If you don’t use heavy weapons like bazookas.

Gives an increase in armor by 6 points. But, it reduces speed indicators in battle by -0.4 units.

It is important to note that increased armor values ​​can only protect against physical damage. The “tumbler” feature will not be superfluous and will help to equip a tank in a squad faster and better.

This feature is more suitable for the character, from which it is planned to make a good attack aircraft. 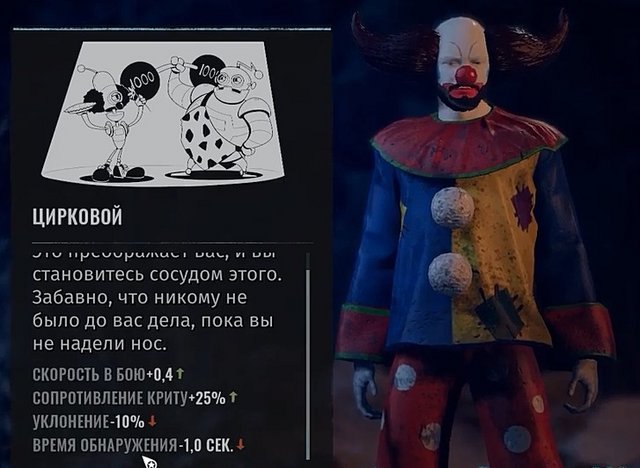 Increases speed in battle by +0.4 units. and increases resistance to critical attacks by + 25%. Reduces evasion by -10% and detection for 1 second. 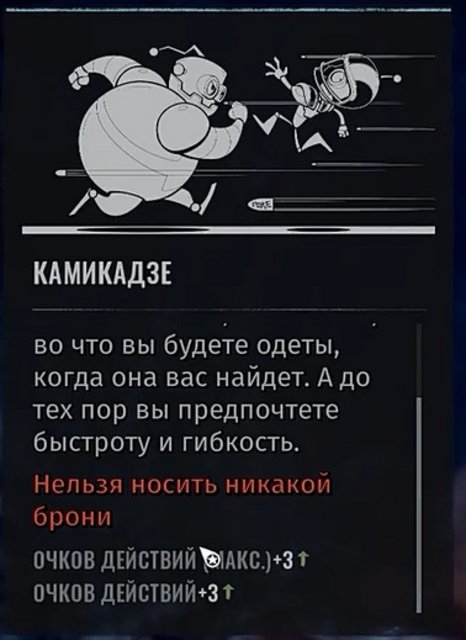 Increases action points by 3 units. But, it forbids the character to wear armor.

This limitation can significantly complicate the entire game, as the characters need to fight and be protected. And the ban on armor just makes the character weak. The feature “Kamikaze” can come up if you make a sniper out of the character and keep a great distance from enemy soldiers. And such a distance, at which the enemy fighter does not see the sniper, is not common.

This feature prohibits the study of books. But, it gives resistance to effects by + 35%. 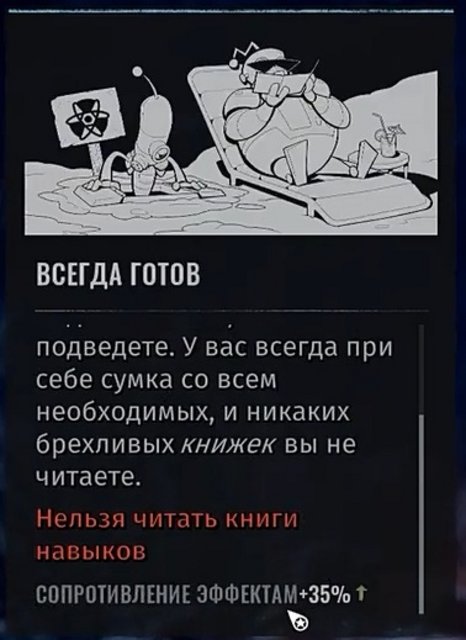 It should be noted that at the initial stage of development, it is recommended to save books until later levels, since pumping is more expensive at the last stages. And books allow you to stimulate and accelerate development. While at the initial stage, raising the level is much easier and you can get by with the use of books.

In terms of resistance to effects, enemy fighters encounter additional weapons. But, again, not so often that the Always Ready feature is a necessity.

Allows you to increase the character “Initiative” by + 20% and increase the ability to attack an enemy fighter first. But, it takes away the opportunity to receive the effects of leadership. 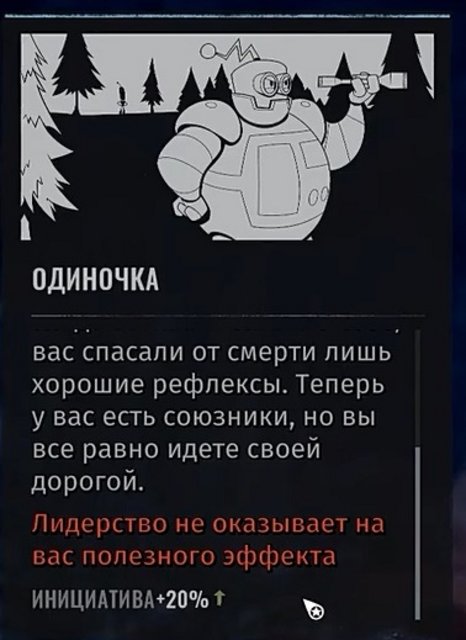 In the game, initiative can provide good moments, where the character attacks the enemy fighter first. On the one hand, it seems that the “Single” feature provides guarantees for the first hit. But in reality, such moments are not always encountered, and most often it is the enemy fighter who begins the first action. As a result, the “Lonely” feature can be considered meaningless.

Increases +5 health points for each increased level. And imposes a penalty on “Revive” during the battle. That is, if the character is critically injured and he falls, he cannot be raised until the battle is over. 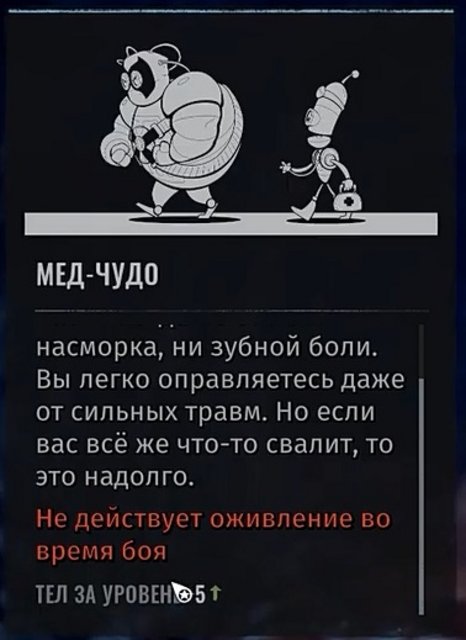 Extra health is always good. This way the characters can last longer on the battlefield and provide decent resistance. In total, you can increase to 140 health units and this is not very much. On the other hand, some characteristics can be increased and you get a very good tank.

Suitable for a scout or asasinu, as it gives +2 seconds to detection. But the enemy fighters will still notice the character. And silently eliminate some kind of enemy fighter will not work. As a result, the “Mim” feature turns out to be meaningless and you shouldn’t take it. 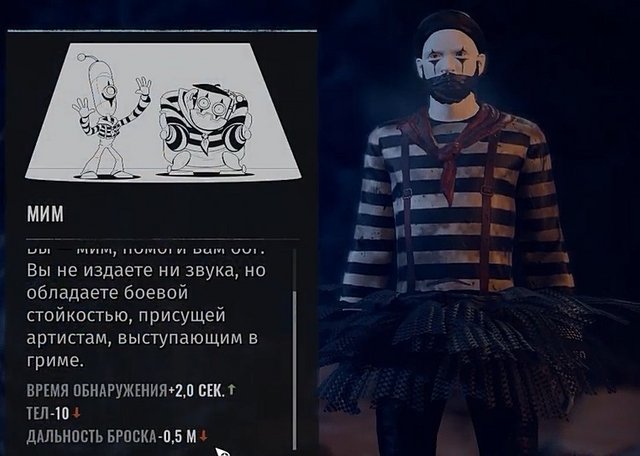 After choosing this feature, the character receives the “Mima” outfit. You can fix it in the same way as in the case with the “Circus” feature.

Allows the character to gain one additional skill point for every 2 new levels. Thanks to this, you can quickly pump the necessary skills and make the character more convenient for specific circumstances. 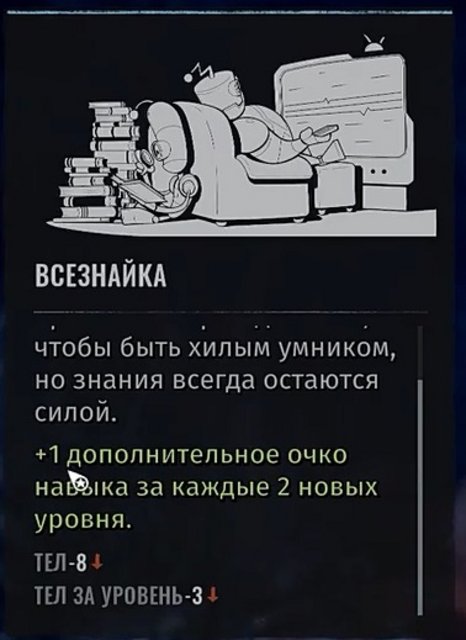 Grants health penalties -8 points upon selection and upon subsequent level increase by -3 points.

Overall, the Know-it-all feature is a pretty good improvement. Perfect for all types of characters, except for the tank. It is very important for a tank to maintain a decent supply of health. Ideally, the trait is more sniper-oriented.

Allows the character to find gold nuggets during excavations. And get priorities in extra money. 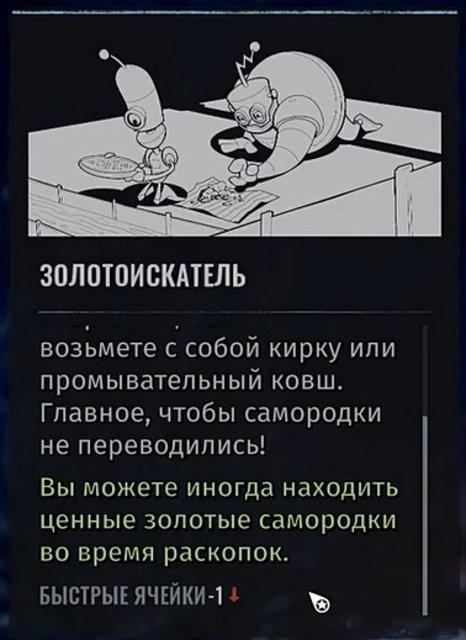 Imposes a – 1 penalty on fast cells. This is not a very significant problem, since during the battle you can go into the inventory. Truth takes up extra time and increases additional actions.

In our opinion, it is better not to take this feature, since nuggets are not as important as combat indicators.

But, it imposes a penalty that increases the chances of fire by 15% when using explosives. 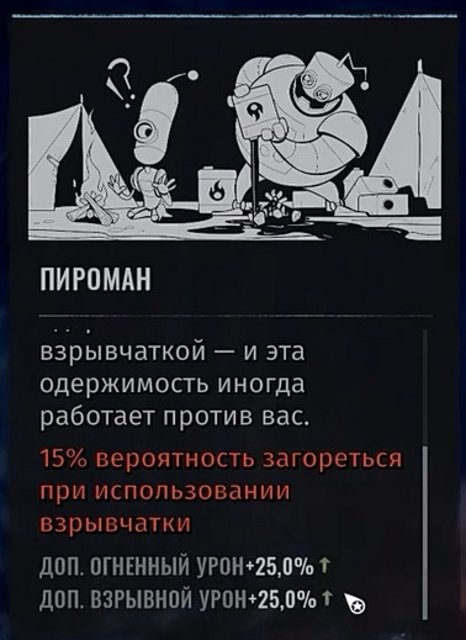 It is important to note that there were cases when a character caught fire from using a grenade launcher. So, in particular, there are not big flaws. Nevertheless, the feature significantly increases the damage, and therefore it will quickly eliminate enemy fighters.

When studying the trait, the character will receive a penalty for increasing the received damage by + 33%. For a tank, such indicators are significant, but for a sniper, the penalty will not particularly interfere in the game. 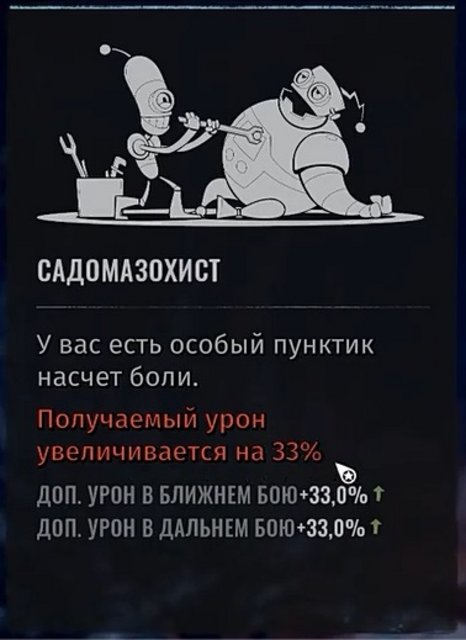 In addition, the Sadomasochist trait increases ranged and melee damage by + 33%.

After choosing this trait, the character receives an additional 3 action points for each kill in battle, in one turn. But, it gives a penalty of 1 action point. 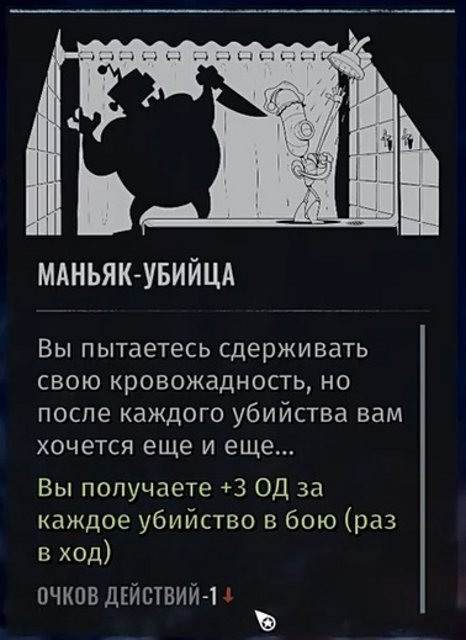 It is worth considering when choosing this trait, as the character is almost motionless when the fight begins. Of course, this may not hurt the sniper in the early stages of the game. But towards the end, it may interfere a little when you need to rebuild. Of course, if the sniper succeeds in finishing off enemy fighters and getting extra points in action, then you can get a good advantage.

At the beginning of the battle, the character receives +2 action points for 2 turns. During this period, you need to try to eliminate at least one enemy fighter. And try to stick to the position behind cover and comrades. 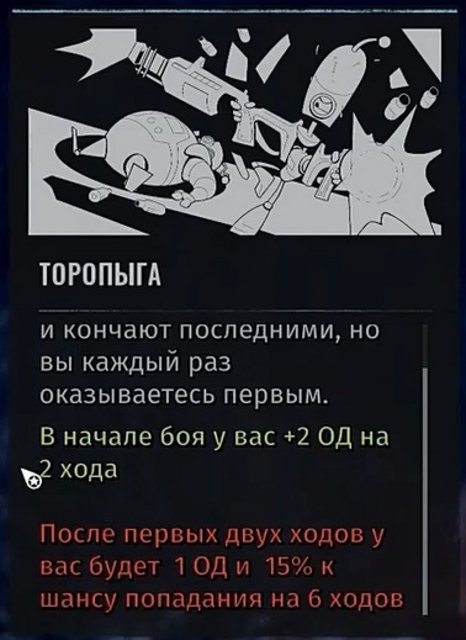 Imposes a -1 action point penalty after 2 moves and may retain the current penalty for 6 moves. Because of which the character can become almost helpless.

When choosing the “Hurry” feature, you need to understand that you will have to pump “Speed” to a decent level. However, one -1 point can affect the course of the battle. As a result, the feature is not very attractive.

The “Varangian blood” feature may suit a character in a support class. When you need to adequately answer and cover your partner. The feature gives +100% to critical damage and an additional +3 action points, this can help solve some tasks on the battlefield. 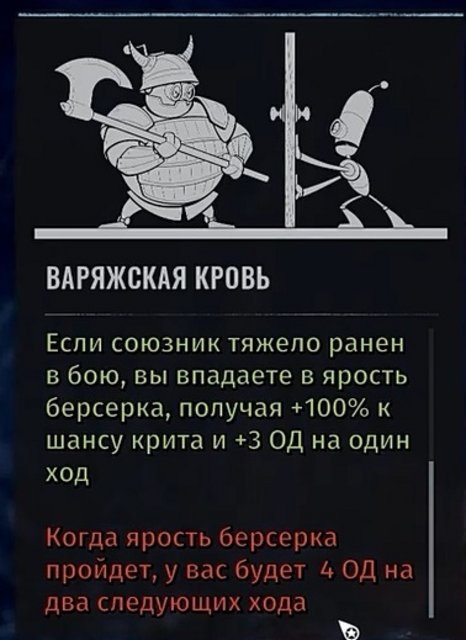 When choosing this feature, you need to understand that when an ally is injured, the character will receive additional benefits. But, the penalties were not canceled, and after the feature “Varangian blood” is activated, the character will be taken away – 4 action points. And this is already a serious problem on the battlefield, since as many as 2 fighters will be incapacitated.

In practice, the “Varangian blood” feature was applied and showed not the best results. Because it just doesn’t work. Critical damage does not work, and shots go through as standard. Maybe this is due to the fact that some enemy fighters have effects that block critical damage.

Based on this, we do not recommend using the “Varangian blood” feature in the case. There is little benefit from it, and if the penalty works, it will not seem small. Especially when the main character has a feature and you need to support an ally.

The Tramp feature increases the character’s resistance to negative effects by + 100%. Such as bleeding, poisoning, shock, burning and freezing. At first glance, it seems that the indicators are really impressive and the character can more easily cope with dangerous enemies. 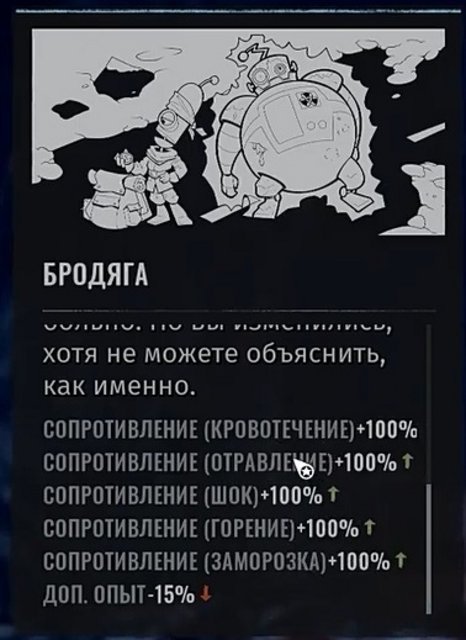 From the penalties for such a chocolate business, the experience gained is reduced by -15%. Which is not very critical and noticeable, since the character is more resistant to unnecessary negative effects.

In fact, the Tramp feature does not work and nothing changes in the interface to the character’s characteristics. The parameters remain the same, but the experience indicators are negative. So, there is no point in taking this feature.

Designed for players who want to make an alcoholic out of their character. Since the bonus to increased damage by + 50% begins to operate after the character is drunk. With this feature, you need to stock up on alcoholic drinks while going hiking. 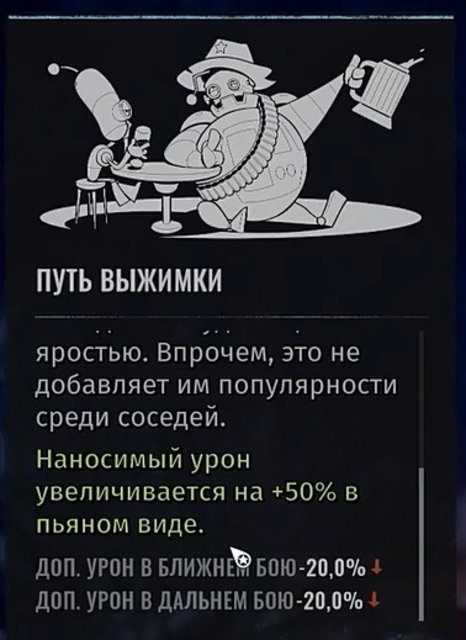 For the bonus, a melee and ranged damage penalty of -20% is given. And here it is still not clear whether the accuracy will fall from the use of alcohol. In fact, the character gets +30% damage. This is quite an interesting feature and there is something to think about.

When choosing a character, you should pay attention to the listed features and if you just want to play usually, then it is better to choose “No Features”. So you can go through the game simply and without any unnecessary problems. In the event of a decision to accept any peculiarity, then you need to look for ways to compensate and close the received fines.