Wasteland 3 has a variety of talents that increase stats in combat. However, not all talents are equally useful. There are not very needed talents, despite their attractiveness. Since, in fact, the battles are varied and enemy fighters have their advantages.

When choosing talents, you need to build on what class your character is. In the game, you can train a melee fighter as a tank, an archer as a support, or an attack aircraft and a sniper. These classes are used in different ways on the battlefield and have their own advantages over enemy fighters.

Talent points are given to characters every 2 levels, after reaching level 4 of characters, one talent point. 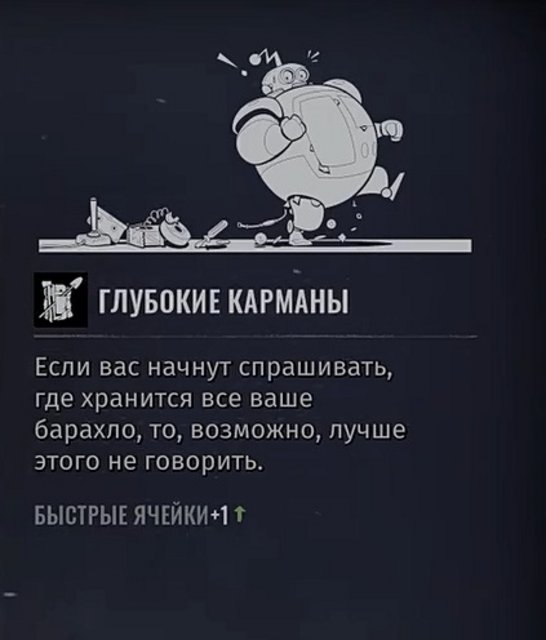 At first glance, a pretty good improvement for the character. It should be noted that the character already has 2 fast cells. Choosing this talent simply saves time. But in fact, one point will be wasted on the “Deep Pockets” talent, since access to the inventory does not require action points. Therefore, you can quickly change an unnecessary item in a fast slot and replace it with a more needed one. 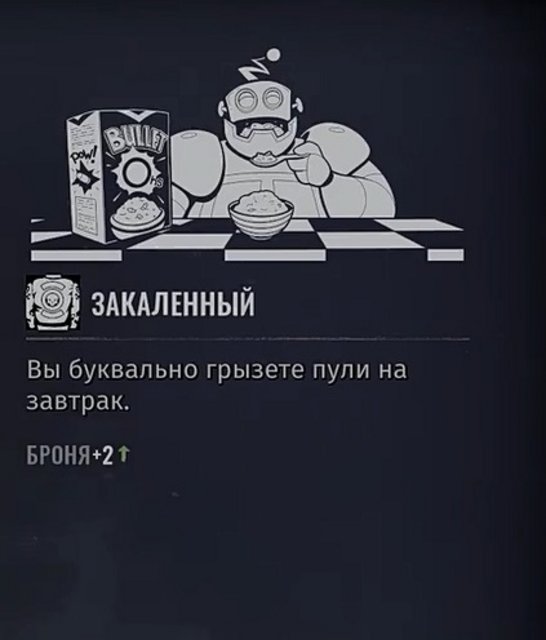 A very useful talent for all classes of fighters. True, the armor indicators are not significant enough, however, we recommend purchasing. Additional indicators to armor will definitely not be superfluous. 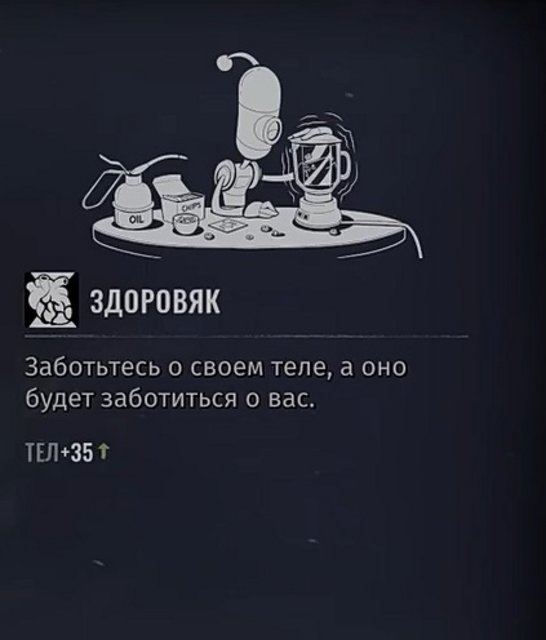 With the help of the talent “Fast Reflexes”, you can increase the character’s evasion rates by + 5%. The increase is not very significant, if you do not increase the dodge rates in other ways. 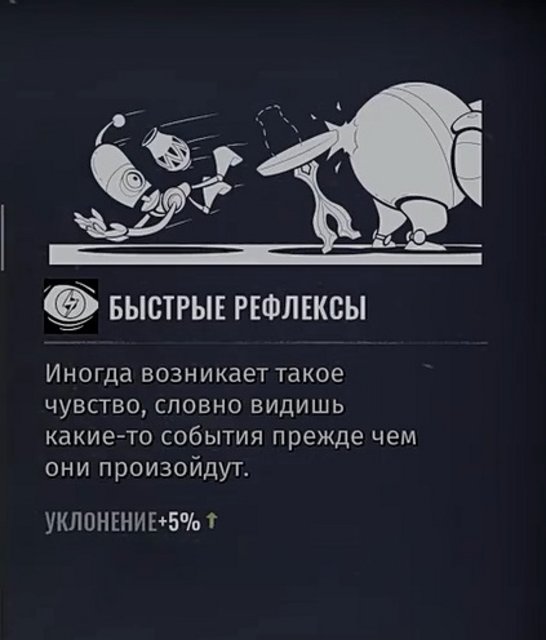 Ideally, the talent “Fast Reflexes” is best pumped at the very last moment. And at the very beginning, we do not recommend spending talent points on the “Fast Reflexes” talent, there will be little benefit. And in case of problematic moments, the characters can be hidden behind cover. 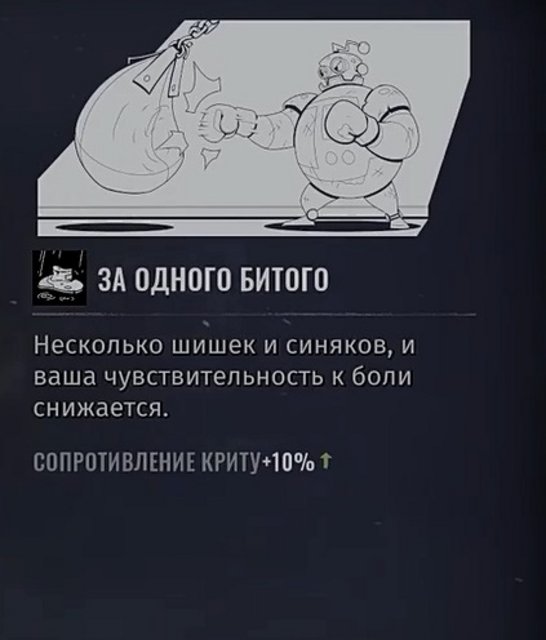 The talent increases resistance to critical damage by + 10%. A very useful improvement if the damage resistance indicators are increased by other improvements and brought to 30%. And at the initial stage of development, the indicators of + 10% will not be significant. As a result, it is better to save the talent point for another improvement. A talent “For one broken” to pump closer to the middle of the game.

You can open talents after learning the skill level. Automatic weapons include pistols and assault machine guns.

Becomes available at skill level 2. After studying, it makes it possible for an automatic weapon to inflict damage in a small area for 5 action points. And hit enemies who are nearby with one shot. In addition, it can deal an additional + 100% damage to stunned targets. 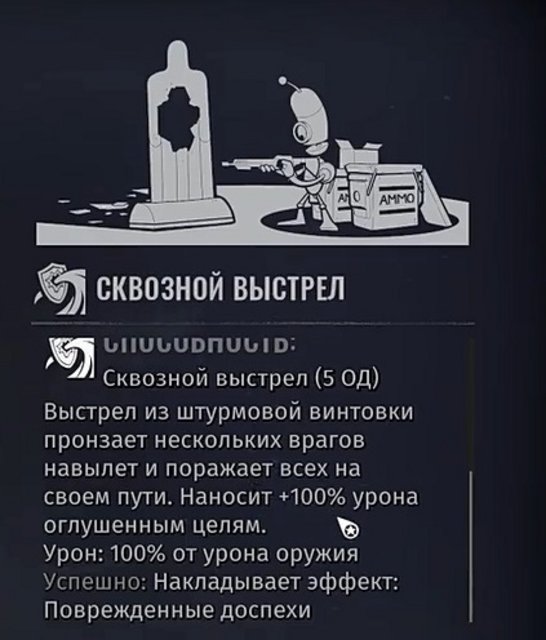 At first glance, a pretty good improvement. But, in most cases, enemy fighters are at a distance from each other and very rarely stand nearby. In addition, you need to use this skill while being close to enemies, and this is very dangerous. Since after the shot it will not be possible to retreat due to the spent 5 full-time actions.

As a result, we do not recommend taking the talent “Through Shot”. And it’s better to spend a precious talent point on more useful improvements.

The improvement will become available after improving the skill to level 3. Reduces the effectiveness of enemy cover by 40%. 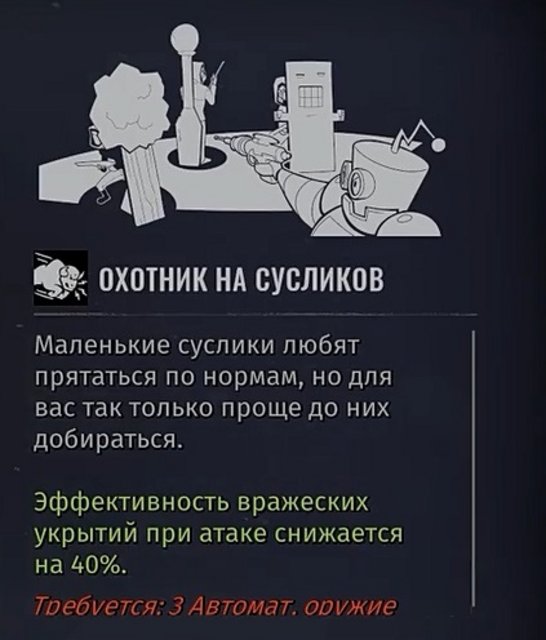 Nice improvement since enemy units are often behind cover. But the “Gopher Hunter” talent only works if the ranger has an assault rifle in his hands.

If this talent was chosen by the rangers and he has an assault rifle, then his main and first targets should be enemies behind cover. It is important to note that the upgrade does not work if the enemy fighter is not behind cover.

As a result, it is worth buying one character on the team who specializes in assault rifles.

The talent becomes available at level 4. And grants the ability to fire with a submachine gun, increasing the damage done by + 100%. This reduces the accuracy by 25%. It is advisable to use this ability when the enemy fighter is close to the character. Using the ability will take 5 action points away. 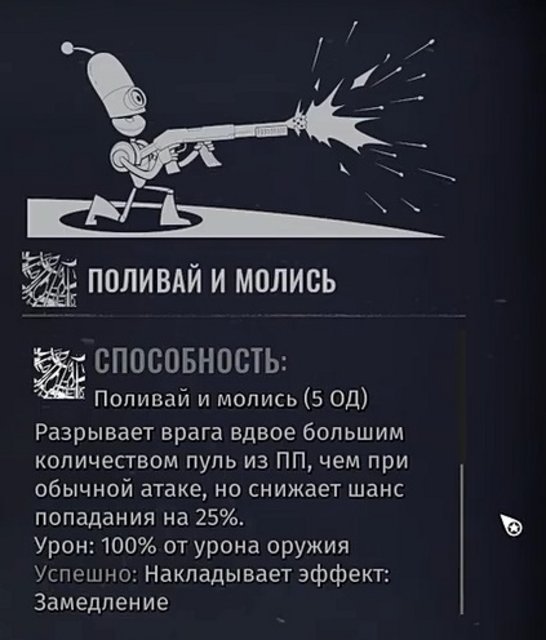 Given the fact that enemy melee fighters are often encountered, the ability will come in handy. 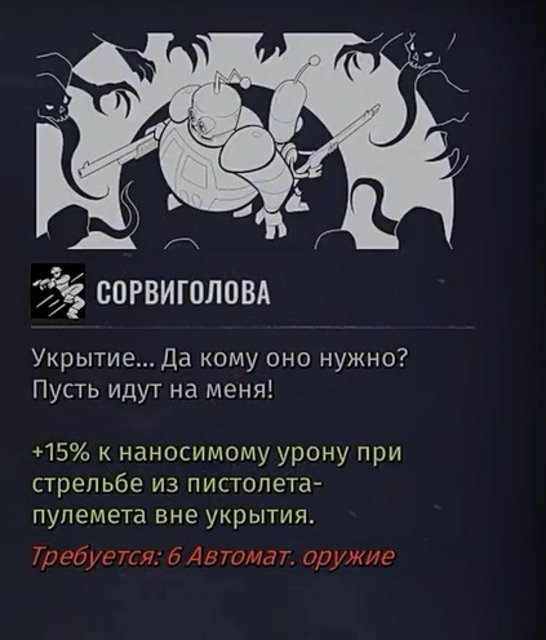 Unlocks at level 6. And it gives + 15% to the damage done if the character is out of cover. Quite a good improvement, only the increase in damage is not very significant. It should be borne in mind that the action applies to submachine guns.

Can be unlocked at level 7. The talent gives a 100% chance of critical damage. In case the first two shots from the assault rifle hit the target. Works on condition that shooting is carried out at one target from an assault rifle. 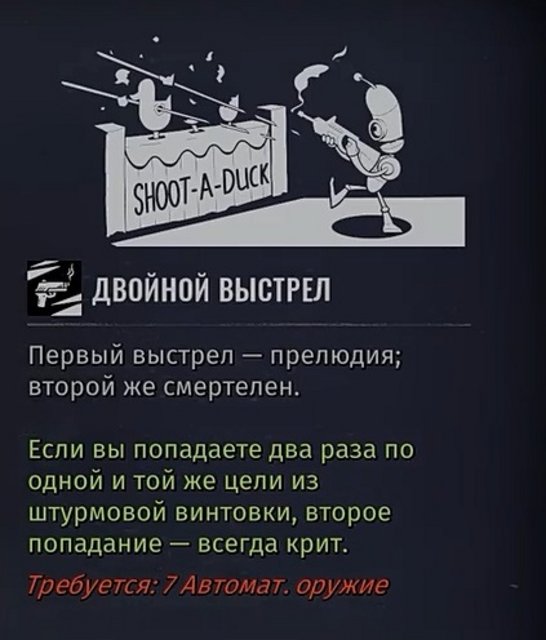 A fairly good improvement, especially when the enemy fighters have good health. It is desirable to pump, with the talent “Double Shot” you can accelerate the victory over enemies. In this case, if possible, it is better to shoot other characters at other enemy targets. So that the improvement has time to work before the enemy fighter is killed by the allies.

The talent unlocks at level 8 and gives priority to a free submachine gun shot. To activate, you need to move 5 cells and then it becomes possible to make one free shot. 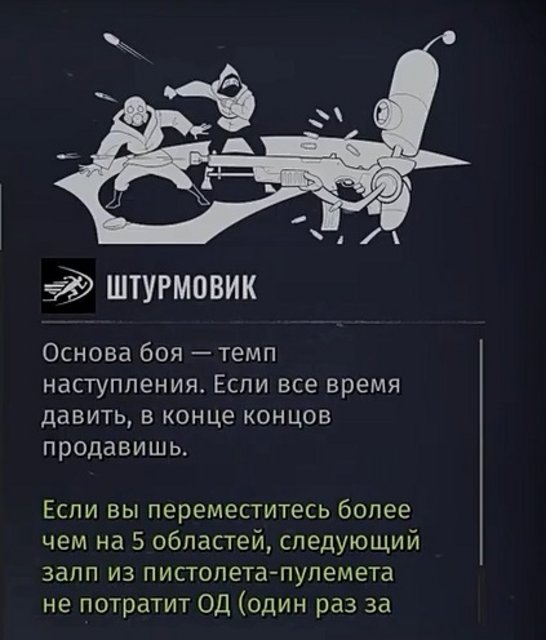 Great talent if you need to move and change position on the battlefield. For example, run to cover and fire a shot.

The upgrade opens at level 10 and gives +3 action points if you managed to kill an enemy fighter. 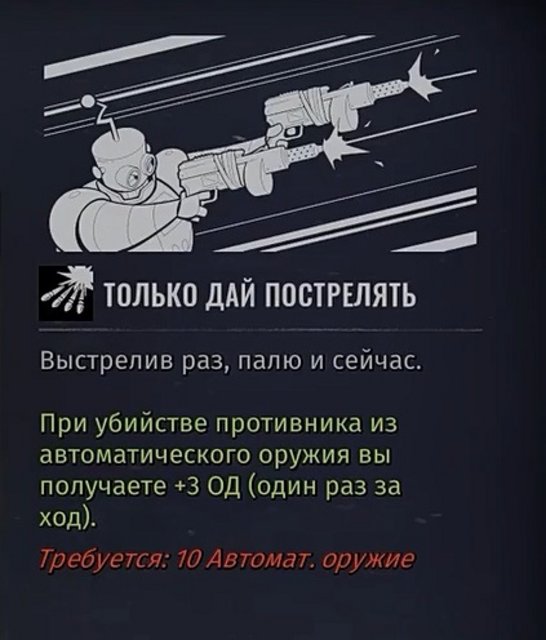 We can say that this is a pretty good improvement for submachine guns and automatic rifles. Considering that the character will finish off enemies. Thus, get additional action points.

The talent focuses on melee blunt and slashing weapons. 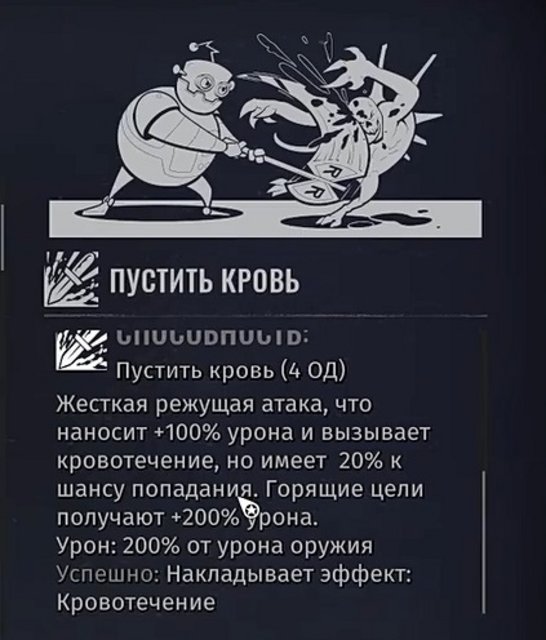 Can be unlocked at skill level 2. After studying, the ability “Bleed” appears, which costs 4 action points. With the help of the ability, the character will be able to deal + 100% damage and cause bleeding, and burning targets will receive + 200% damage. And + 20% to the chance to trigger bleeding.

Unlocks at level 4 and grants the Stunning Strike ability. Which makes it possible to stun an enemy target with a melee blunt weapon with a 15% chance of stunning. And frozen enemies receive + 100% damage. 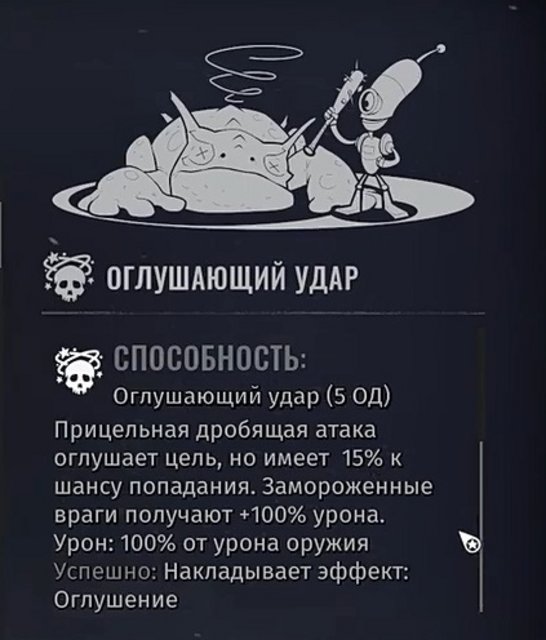 A very useful talent if one of your characters has the ability to freeze enemies. 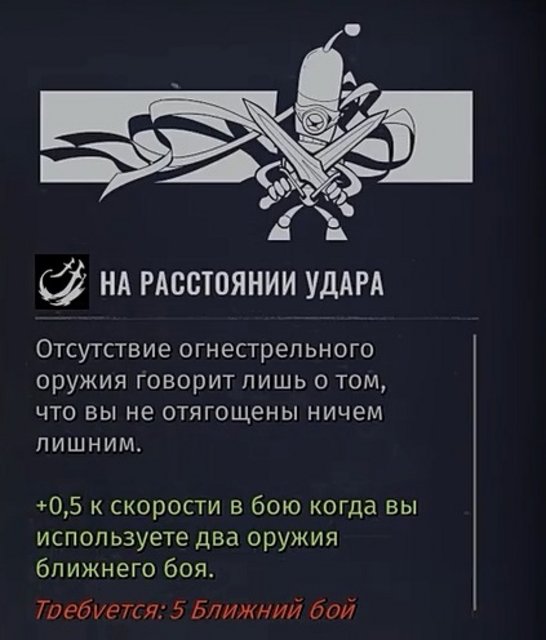 Can be learned at level 5. When studying, the character gains a bonus to speed by + 0.5 units if there are two melee weapons. It is advisable to acquire this talent, since the melee character needs to move frequently. Speed ​​matters a lot, including armor and health.

You can open it at level 6. Gives 100% critical damage to enemy units if they are stunned or blinded. In fact, this talent is not much pointless, since stunning enemy fighters does not always matter. 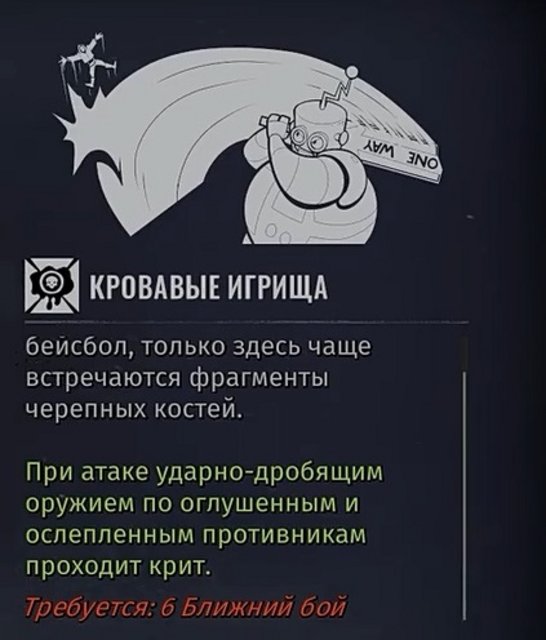 Unless you specially stock up on blinding grenades and use them during the battle. And the blinding of enemy fighters does not go often. As a result, it is easier to inflict damage on a nearby target rather than running after the blinded one.

You need to study the talent “Blood Rumble” after you get the ability “Thunderstrike”. In this case, the total effect and damage will be quite impressive. And keep in mind that this talent works with blunt weapons. 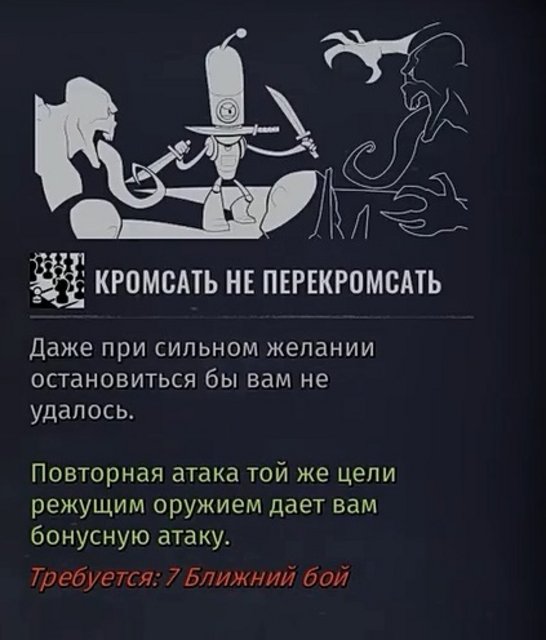 The talent is available at level 7. And it gives an additional bonus attack if two attacks were made on the same enemy target. 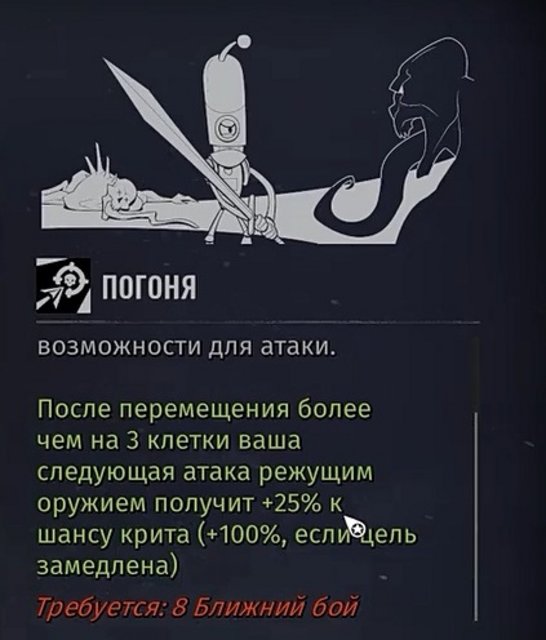 Unlocks at level 8. The talent allows you to get an additional chance of critical damage by + 25%, if the character moved 3 cells to the enemy fighter. And an increased critical hit chance by + 100% if the enemy is slowed.

You can learn at skill level 10. The upgrade gives +2 armor for each enemy fighter that is next to the character. Provided the character has a melee blunt weapon. 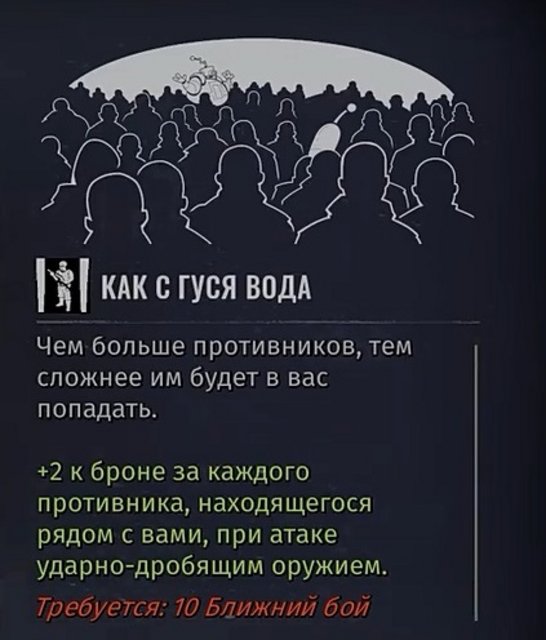 In fact, it is better not to take the talent “Like water off a duck”, since at high levels the +2 increase to armor will not be very significant. Plus, two enemy fighters can make good problems. In most hostilities, it can be noted that it is better to keep enemy fighters at a distance. And for a melee character, a 1v1 battle is fine, taking into account the cover of fire from allied characters.

As a result, it turns out that the talent “Like water off a duck’s back” is a little pointless. Enemy fighters will be able to penetrate the armor, and the blocking of damage will not be significant. Better to leave a talent point for another improvement.