Developed by ČKD for the needs of the Czechoslovak Army in 1938. During the German occupation was in service with the Wehrmacht. As part of German tank units, it was used in the Polish and French campaigns, as well as on the Soviet-German front. In the combat units of the first line was used until mid-1942. Around 1,400 tanks were produced in eight versions (Ausf A / B / C / D / E / F / S / G).

History ordered that the production of LT vz.38 began when the army of Czechoslovakia ceased to exist. After the German occupation in March 1939, the tank was adopted by the army of invaders. In the Wehrmacht, the car received the designation Pz.Kpfw.38 (t) Ausf.A (simplified names are also widely used – Pz.38 (t) or 38 (t)). It is interesting to note that the Germans did not have any information about TNHPS before the occupation of the Czech Republic and Moravia.

But German experts were able to appreciate the fighting qualities of the new tanks. In the period from May 2 to 6, 1939, the Arms Management Commission worked at the ČKD plant under the leadership of Lt. Col. Olbrich, who was responsible for the development of promising models of armored vehicles. The commission quickly decided to purchase for the Wehrmacht all 150 units previously ordered by the Czechoslovak army. Ten days later, the German military reception began working at ČKD, which was soon renamed by the Germans as BMM (Böhmisch Mährische Maschinenfabrik AG). The last tank from the first series was adopted by the Germans on November 23, 1939. 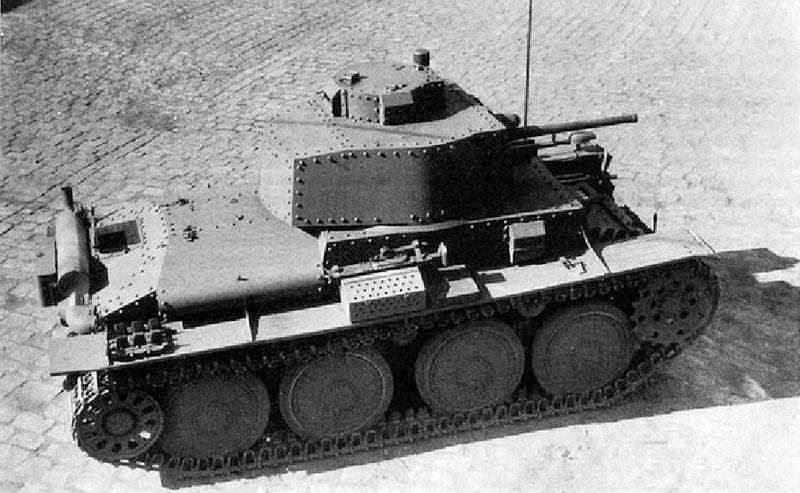 The legendary tank during operation had several modifications:

The German army received 150 Pz.38 (t) Ausf.A tanks of this series. These machines were almost completely identical to those intended for the Czechoslovak army. With a mass of 9.7 tons, they were armed with a 37 mm A7 gun (the German designation is KwK A7) with a barrel length of 42 calibers and two 7.92 mm machine guns vz.37 (in the Wehrmacht – MG 37 (t)). Ammunition consisted of 72 rounds and 2700 rounds.
6-cylinder in-line engine of liquid cooling Praga EPA with a capacity of 125 liters. from. allowed the tank to reach a maximum speed of up to 48 kilometers per hour. Cruising range – 230 km. The tank was equipped with a Praga Wilson six-speed planetary gearbox and a multi-disc main dry friction clutch. 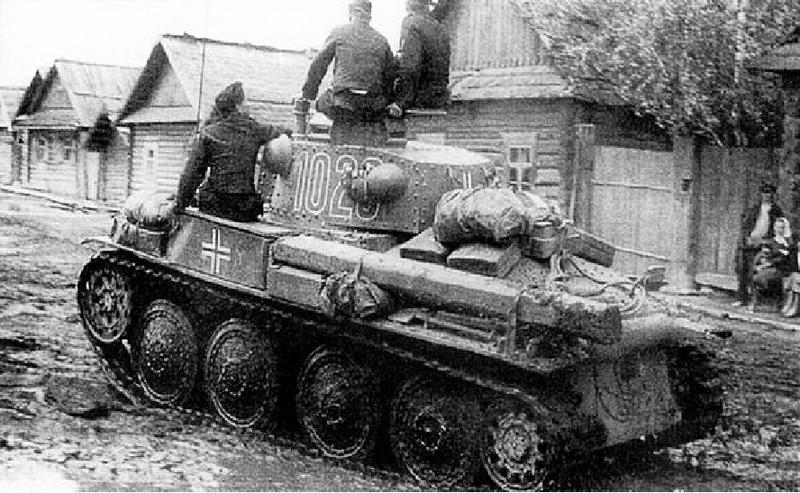 The chassis included four rubberized road wheels of large diameter on board, suspended in pairs on semi-elliptic leaf springs, two support rollers, a front-wheel drive wheel, a steering wheel and a steel track. The thickness of the frontal armor of the hull reached 25 millimeters, onboard – 15, aft – 12, roof – 10, bottoms – 8 mm. The armor protection of the tower ranged from 15-25 millimeters.

After receiving the German army of tanks PzKpfw 38 (t) Ausf.A. Tanks almost immediately upgraded and converted to their own standards. In the German version, the crew of the tank was 4 people. Armor performance was also improved. They reinforced the ballistic installation of the ballistic machine gun and installed their own radio equipment. In the original Czechoslovak version, the tank was equipped with a vz. 37 radio station with two antennas – a pin. Having saved the latter, the Germans installed their Fu 5 radio station. In addition, German-style ammunition boxes were used. 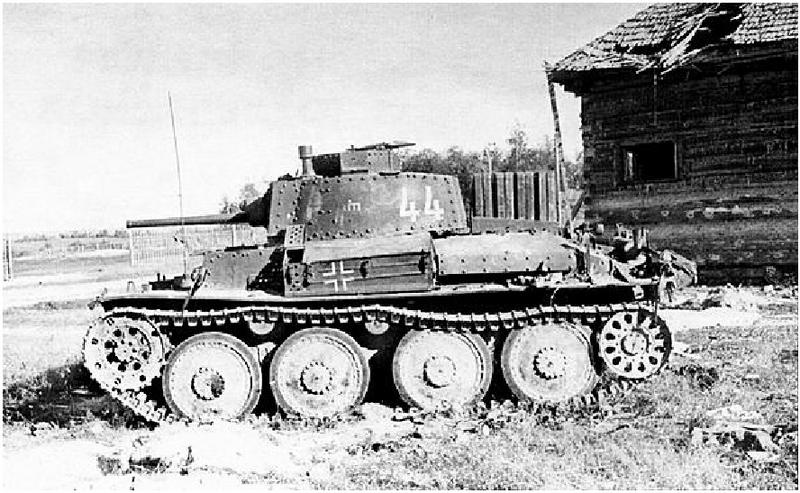 Tanks modifications Ausf.V were produced from January to May 1940. During this time, 110 cars were produced. They eliminated the handrail antenna, mounted the German headlight Notek, slightly changed the embrasure of the gun sight. On some tanks already in the troops, for example, in the 19th Panzer Division, smoke exhaust devices were installed.

This series also consisted of 110 units and was produced from May to August 1940. Combat vehicles of modification C were distinguished by the presence of a German-style radio antenna, a modified location of the muffler and ring armor of the tower epaulet.

In the design of 105 tanks of modification D, released in September – November 1940, taking into account the experience of military operations in Poland and France, the frontal plate of the hull was changed. Now it has become direct, and on the part of the vehicles its thickness has been increased to 50 mm, reinforcing the standard 25 mm armor with an overlay of the same thickness.

From November 1940 to May 1941, 275 tanks of the E modification were manufactured. They were variant D with reinforced armor. The thickness of the frontal sheets of the hull and turret was brought to 50 mm (25 + 25 mm), and the side – to 30 mm. The mass of the machine increased to 10.14 tons. In this regard, it was necessary to increase the number of sheets in the springs of the front suspension trucks from 14 to 15. The annular plate around the loophole of the tower machine gun was eliminated, and a large equipment box was mounted on the left above the caterpillar shelf. 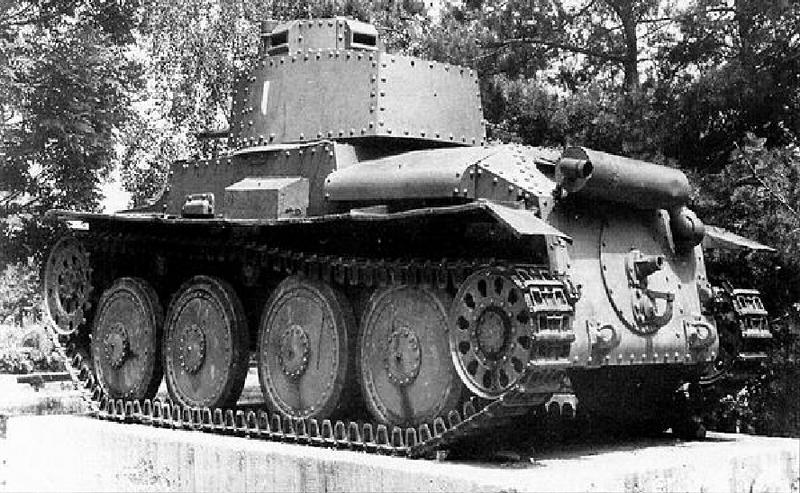 At the end of the production of modification E tanks, from May to October 1941, 250 Model F vehicles left the factory workshops. The tanks differed from the previous one only in small details, for example, brackets for attaching canisters.

Along with Ausf.F, from May to September 1941, tanks of the S version were produced. Sweden ordered them back in late 1939. But in 1940 the Germans confiscated the entire series of 90 units. Ausf.S tanks were identical to vehicles of variants A – C, with the exception of 50 mm of frontal armor.

After the German attack on the USSR, an order was received for 1000 tanks in two series – 500 Ausf.G and 500 Ausf.N. However, from October 1941 to October 1942 only 306 Ausf.G units were produced, the remaining chassis of this model were used in the manufacture of Marder tank destroyers. For self-propelled artillery installations and tank destroyers, all chassis of option N. were also involved.

Structurally, combat vehicles of version G differed from tanks of modifications E and F only in that the frontal armor plates of their hulls were made not integral, but integral. 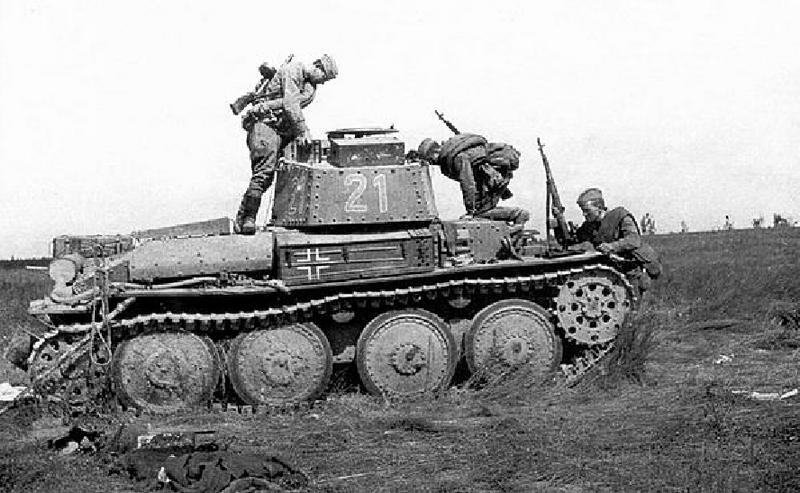 Several dozens of tanks of modifications B – G were converted into Panzerbefehlswagen 38 (t) commander tanks. They dismantled the exchange machine guns. The hole for the ball installation was drowned out with a round armor cover. And instead of the gun they installed its wooden model. Company commander tanks were equipped with Fu 5 and Fu 6 radio stations, battalion and regiment radio stations – Fu 5 and Fu 8. The first had whip antennas, the second had whip antennas. In addition, gyro semi-compasses were installed on the command tanks.

In the online game world of tanks, the German light tank PzKpfw 38 (t) is on the third level. A second-line sniper machine or an analogue of a tank destroyer, but with low-power weapons for a tank destroyer. In addition, it has an accurate gun, which allows not only to fight at long distances, but also to aim at the modules nearby.

Even with the initial modification, the tank is quite capable of dealing with a tank of the same level. If you maneuver and carefully aim, then you can provide serious resistance to enemy tanks. And thanks to an accurate and powerful weapon, they can effectively destroy enemy tanks. The weak point of the tank is booking. Better to ride in the second row and save your strength points. And then play actively when the first line of the Allies disperses.

The 4.7 cm PaK 38 (t) L / 43 gun penetrates even B1 bis. This must be used and played behind the backs of stronger comrades. In this case, inflict damage on enemy tanks with precision shots. The tank also has excellent mobility and decent speed, which allows it to break through the flank under good circumstances. And if there is a need to capture the base and destroy artillery. All in all, the PzKpfw 38 (t) is a great support tank.