The Wehrmacht Arms Department concluded that it was necessary to develop a new reconnaissance tank, the design of which would take into account the experience of the first years of the war. But this experience required an increase in the number of crew members, a larger margin of engine power, and the installation of a radio station with a large radius of action.

In April 1942, MAN manufactured the first prototype of the VK 1303 tank weighing 12.9 tons. In June, it was tested at the Kummersdorf training ground in conjunction with the Pz.38 (t) VMZ and T 15 tanks from Škoda, which were developed according to the same technical specifications. During the tests, VK 1303 covered 2484 km. At the same time, the engine and the main clutch worked flawlessly. 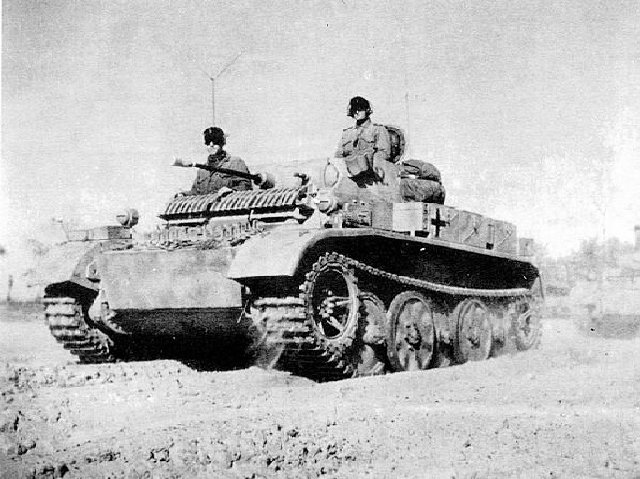 The tank VK 1303 was adopted by the Panzerwaffe under the designation Pz.2 Ausf.L Luchs (Sd.Kfz.123). The production order for MAN amounted to 800 combat vehicles.

German light tank Pz. 2 Ausf.L Luchs, named after the animal Lynx. Luchs was better armored than its predecessor, the VK 901, but the maximum armor thickness also did not exceed 30 mm, which was clearly insufficient. The box-shaped welded hull had three compartments: control (it is also transmission), combat and motor. In the front of the case, a driver mechanic was located on the left, and a radio operator on the right. At the disposal of both in the frontal sheet of the hull there were observation devices closed by movable armored dampers, and viewing slots in the sides. The commander (aka gunner) and the loader were located in the tank tower. 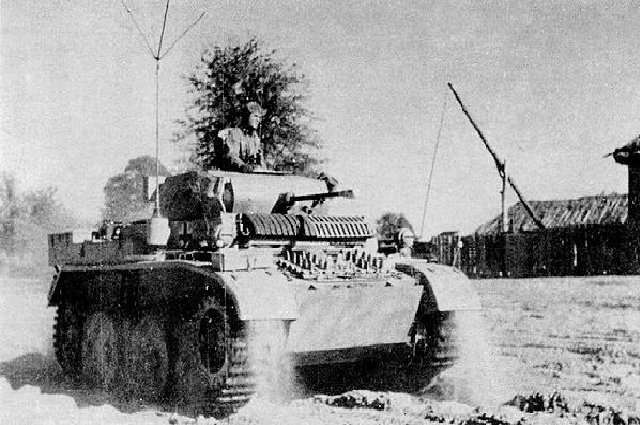 The welded tower was larger than all previous reconnaissance tank models, but, unlike the VK 901 and VK 903, the commander’s turret on the Pz. 2 Ausf.L Luchs was absent. Two periscopic observation devices were installed on the roof of the tower: one in the cover of the commander’s hatch, the other in the cover of the loader’s hatch; the latter also had a viewing device on the starboard side of the tower. In contrast to all modifications of the Pz line tanks. 2, the tower on Pz. 2 Ausf.L Luchs was located symmetrically relative to the longitudinal axis of the tank. Its rotation was carried out manually, using the rotation mechanism. 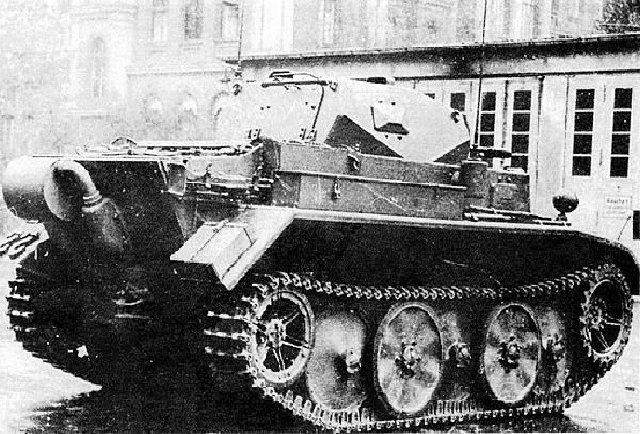 The armament of the tank consisted of a 20 mm Rheinmetall Borsig KwK 38 gun and a coaxial 7.92 mm MG 34 machine gun (MG 42). The gunner used a Zeiss TZF 6/38 telescopic single-lens scope with 2.5x magnification to fire a cannon. The same sight could serve for machine gun firing. The latter, in addition, was equipped with its regular sight Kgz F 2. Ammunition consisted of 330 rounds and 2250 rounds. Vertical guidance of the paired installation was possible in the range from 9 ° to + 18 °. Three NbK 39 mortars were installed on the sides of the tower to launch smoke grenades of 90 mm caliber. 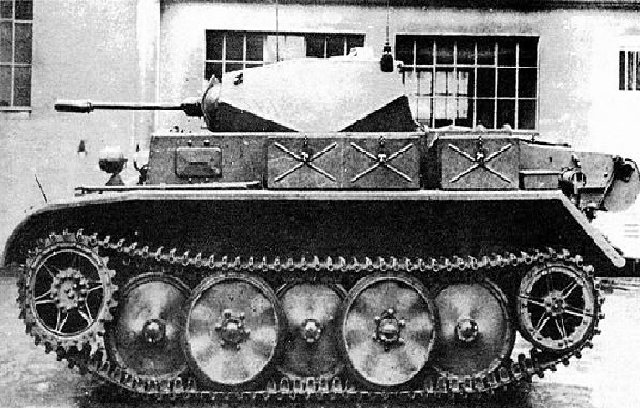 Even during the design of Pz. 2 Ausf.L Luchs engineers knew that the tank’s gun was weak and a 20 mm cannon could significantly limit the tactical capabilities of the tank.

Therefore, from April 1943, it was supposed to begin production of military vehicles armed with a 50 mm KwK 39 cannon with a barrel length of 60 calibers. But it was not possible to introduce it into this tank, since the size of the tower was not sufficient and would have to reduce ammunition. As a result, a larger tower was opened on top of the tank, in which the 50 mm gun fit perfectly. The prototype with such a tower was designated VK 1303b. 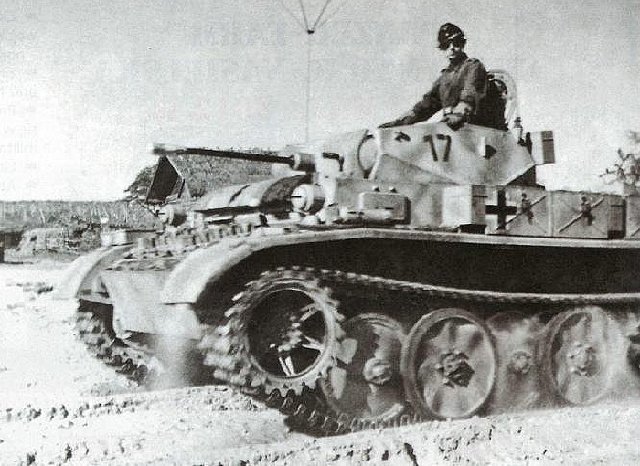 Serial production of reconnaissance tanks of this type was launched in the second half of August 1942. Until January 1944, MAN produced 118 units, Henschel – 18. All of them were armed with a 20 mm KwK 38 cannon. But about tanks armed with a 50 mm cannon, it is difficult to specify their exact number. According to various sources, from four to six tanks left the factory floor.

Equipping the army with the first tanks Pz.II Ausf.L Luchs.

The first production Pz.II Ausf.L Luchs began to enter the army in the fall of 1942. They were supposed to arm one company in the reconnaissance battalions of tank divisions. However, due to the small number of vehicles released, very few Panzerwaffe units received new tanks. 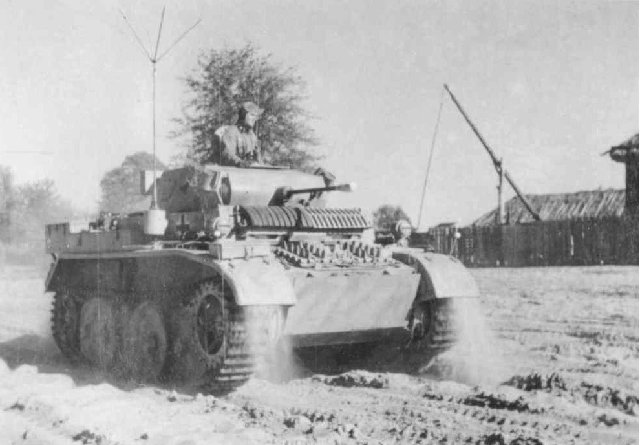 On the Eastern Front, these were the 3rd and 4th Panzer Divisions, in the West – the 2nd, 116th and Training Panzer Divisions. In addition, several vehicles were in service with the SS Panzer Division “Dead Head”. In these compounds Pz.II Ausf.L Luchs were used until the end of 1944. During the combat use, the weakness of the armament and armor protection of the tank was revealed. In some cases, its frontal armor was reinforced with additional armor plates with a thickness of 20 mm. It is reliably known that such an event was carried out in the 4th reconnaissance battalion of the 4th Panzer Division.

In the ondine game world of tanks.

German light tank Pz. 2 Ausf.L Luchs is on the fourth level. Great tank for flank attacks and reconnaissance. The tank has a good gun and mobility, which allows it to quickly change direction and destroy the enemy’s stern or board.

In battle, the tank is great for reconnaissance in battle. Thanks to the good pawn 3 cm M.K. 103, which has a loading magazine for 10 shells, the tank comfortably conducts hostilities. And it is able to penetrate tanks to a higher level. At the same time, the kit also includes good maneuverability and speed, which without any difficulty moves from flank to flank. Able to spin an enemy tank. 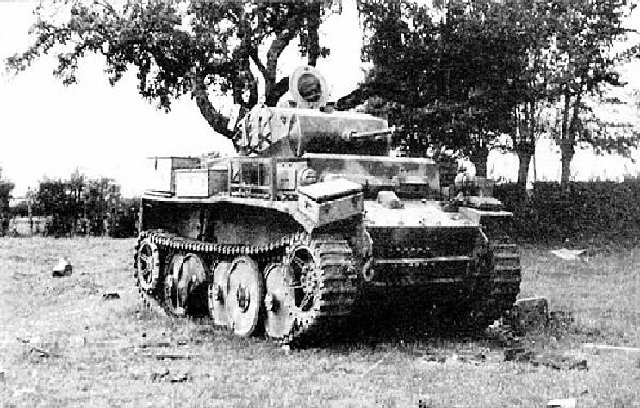 Weaknesses can be called his reservation, it is almost there. We have to run from cover to cover and enjoy the support of allies. And without allies it’s difficult to drag a battle. The tank breaks through almost all the tanks of classmates.

As a scout, the tank is excellent. And suitable for different types of intelligence. Like a passive, hiding in the bushes. So active, maneuvering at speeds in a small radius from enemy tanks, and then go to their base. At the same time, allied tanks should cover the tank in reconnaissance.