Soviet light tank T 50 is the best Soviet pre-war light tank. Developed in the early 1940s to replace the obsolete T-26. It was created taking into account the experience of the combat use of the T 26 tank in the Finnish war. And according to the results of tests in the USSR of the German tank Pz.NI. When creating a German tank, a number of design solutions were borrowed: a triple tower and a commander’s turret. Due to the outbreak of the war and complex production technology, it was not widely used.

The development and design of the tank was carried out at the Leningrad plant named after S.M. Kirov, and in the summer of 1940 the first prototype was made. The T – 50 tank turned out in its armor protection equivalent to the T-34 medium tank. He was the most constructively tested and balanced, optimal in terms of the combination of operational and combat qualities. Being much smaller in size and combat weight of the German medium tank Pz.lll, it was superior or at least not inferior to it in armament, armor and mobility. His 45 – mm cannon at a distance of 500 m, at the time the war began, could successfully fight all types of Wehrmacht tanks.

It was produced at the plant No. 174 named after K.E. Voroshilov. The project manager was S. A. Ginzburg. Adopted in February 1941. Due to the lack of engines and organizational problems with the deployment of production at new locations, the T – 50 was completed in March 1942. From July 1941 to February 1942, 65 units were manufactured. Soviet light tank T – 50 took part in the battles of World War II in 1941-1943.

The body is welded, with large angles of inclination of the armor plates. The tower is welded, streamlined, triple, equipped with a commander’s cupola. The hull and turret of the tank had significant tilt angles, so its appearance of the T-50 was very similar to the average T-34 tank of the same layout. In the control compartment with a slight offset from the center towards the port side, there was a driver’s workplace, the rest of the crew (gunner, loader and commander) were in a triple tower. The engine was located longitudinally in the aft of the tank.

The advantages of the design of the tank is the rear location of the transmission compartment, that is, the drive wheels, favorably reduced their vulnerability. Since the rear end of the tank is the least susceptible to enemy fire. Other advantages of the layout chosen for the T- 50 include a low height and total tank weight. But this was achieved at the cost of minimizing the reserved volume and in the presence of a crew of four people inevitably led to ergonomic problems. 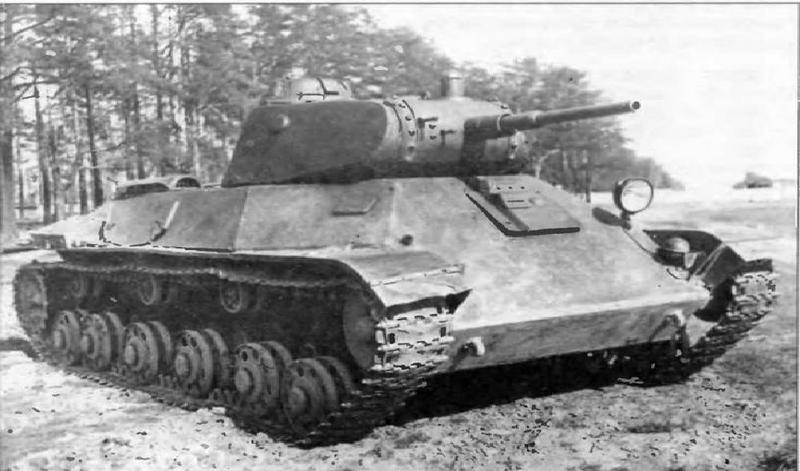 The manufactured tanks took part in hostilities as part of several tank units. In particular, in August 1941 in the 1st Panzer Division, stationed in the Leningrad Military District. 37 production vehicles and one prototype tank of the Kirov Plant fought on the Leningrad Front. Several T-50s were part of the 7th Army, which participated in battles on the Karelian Isthmus with the Finnish army. Some T 50 tanks that fought on the Leningrad Front were equipped with additional armor shields during military repairs.
A small number of T-50s continued to fight on the Leningrad Front and in subsequent years, the last machine was lost in September 1943. T- 50 towers were used in the construction of fortifications near Leningrad. Another 150 tanks were received by 150 tank brigades; as of September 25, 1941, they were in the brigade.

27 T- 50 tanks, both Leningrad and Chkalovsky, were included in the 488th separate tank battalion deployed to the Transcaucasian Front. In October 1942 – January 1943, the battalion actively participated in battles in the North Caucasus. By February 1, 1943, the battalion had no operational materiel, and soon departed for reorganization.
In 1943, one T 50 tank was in service with the 5th Guards Tank Brigade, which liberated Novorossiysk.

The Soviet light tank T- 50 is at level 5. It features high speed and excellent maneuverability combined with good armor. The main purpose of the tank is to detect enemy positions, as well as the destruction of enemy artillery.
The strengths of this tank can be called its mobility and disguise. The maximum speed leaves 60 kilometers an hour. A good indicator for a light tank. Which allows you to quickly change moisture and highlight enemy tanks when playing in active light. True, not a very large viewing radius, which is 300 meters.

In addition, the tank throws into the game with high-level equipment. The strength of the tank is 360 units. And if a tank encounters tanks of a higher level in battle, its survival becomes low. Booking a tank is not very good, you have to play carefully. And as soon as the enemy tank is lit up, it is better to give a course back to the allies.
Two guns of 45 mm 20KM and 45 mm VT-43M are presented at choice. With a 45 mm VT-43M gun, the tank will feel a more comfortable game. Allows to penetrate armor up to 90 millimeters with a basic projectile and inflict damage of 70 units.

Shine actively on the Soviet T- 50 light tank even in battles against the seventh levels. But in this case it is impossible to stop for a second and it is imperative to install enlightened optics. And it is advisable to have a crew with perks pumped for review, otherwise it will not work to play a good scout.

The rest of the Soviet light tank T- 50 checkpoint. By acting carefully and taking advantage of it, you can also achieve high results. And in consequence to enjoy the game.