Their people live in the northern woodland, and Prince Raganvada is considered the leader. The main trading resource is fur. And thanks to him, he managed to attract merchants from other regions, thereby establishing close relations. The elders entered into alliances with new peoples, and they hired the army and the necessary weapons with money from the sold fur.

After the collapse of the Empire, it was not difficult for them to unite into a union state under one flag. Since there were already close ties and concluded alliances. And in difficult times, reliable allies were needed, capable of providing valuable support.

These fighters can and should keep the advance in the forefront, as they have excellent defense indicators and have 16 units in the squad. The health of the fighters is standard and is 100 units. They can be equipped with throwing axes.

In picking “Improved Armor” the fighters have 49 units of defense. And is equipped with three equipment “Sword”, “Shield” and “Spear”. “Sword” deals 68 damage, which is not very much. “Shield” has a strength of 160 units. Spear deals 30 damage and is well used against cavalry. 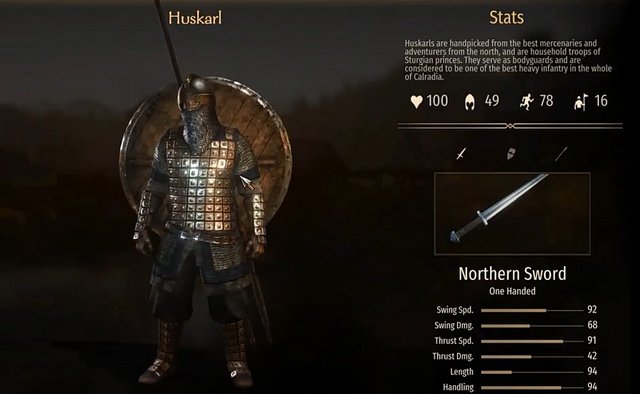 The “Heavy Ax” package reduces defense to 40 units, but gives the best Ax weapons. Which deals damage in 94 units. There is also a “Shield” and “Spear”.

We do not offer a set with throwing axes, since there are only 4 of them and it does not bring high priority.

In our opinion, the “Heavy Ax” will be the best equipment, since in this case a good one-time damage is possible. And this suggests that the fighters can restrain the first enemy attacks and give good change. In this configuration, offensive operations are just as good.

In terms of picking “Improved Armor”, then here at the request of the player. Since at the disposal of increased protection of 49 units, which can increase the survival of fighters. Consequently, they can hold back enemy infantry longer. But due to the average damage of 68 units, you can’t count on a good attack.

The squad can contain up to 18 fighters who are able to take the first attacks and deter the enemy’s attack. It’s good to use them against other infantry and rays. The health of this unit is different from others because it is 110 units, not 100 units. 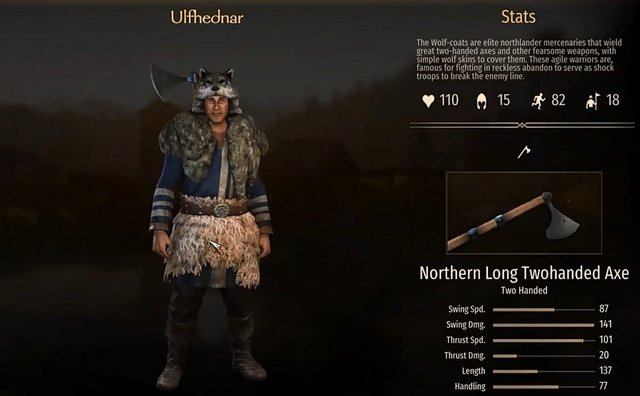 This fighter can be equipped with throwing axes. But not very appropriate armor. When choosing a kit, there is something to think about, since if you abandon throwing axes, you can increase armor. And in an improved configuration, the warrior puts on the old armor, but receives good weapons, which inflicts decent one-time damage.

In the “2h Long Age” configuration, the weapon can deal damage of 141 units. In this case, the ax is long and may cause damage first. Protection is 15 units, this is not the best protection among an infantryman. In the end, it turns out that it ideally suits the role of supporting and protecting archers.

Of the available mounted fighters of the Sturgia faction, this is the best option. It will not bring much priority on the battlefield since there are few fighters in the squad. Only 7 units with protection of 38 units of armor. Well can be used as support and cover for the flank. 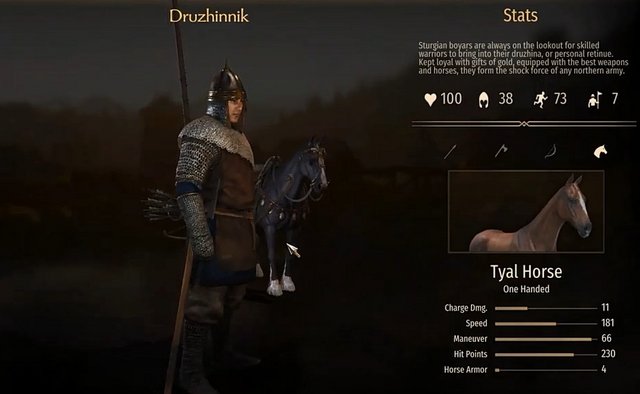 The best equipment in our opinion is the “Hunting Bow”. Since the fighters can use the “Bow” in the battle for 25 shots and inflict damage in 42 units. Given the fact that there are only 7 units in the squad, the Onion can be very useful. And the soldiers in the squad will have more chances to save and stay in battle longer.

When the arrows run out, Druzhinnik can use the Ax, which deals 74 one-time damage. And it can repulse the remaining unfinished enemy fighters.

It is considered an ordinary people who disconnected from the great Empire, having appropriated the North-Western territory. Settlements are located in forest areas, and residents value intelligence and cunning.

The developers in the Battania faction combined several nations, such as the Irish and the Scots. And if possible, they tried to convey the spirit and culture of these peoples in the game.

Among the other peoples of the Empire, the Battanitz army is distinguished by excellent archers.

Armed with a Falx saber with 119 damage, which is very good for melee weapons. Moreover, the weapon has a good attack speed. The health margin is 100 units, and the protection is 12 units. A squad can have 17 fighters. 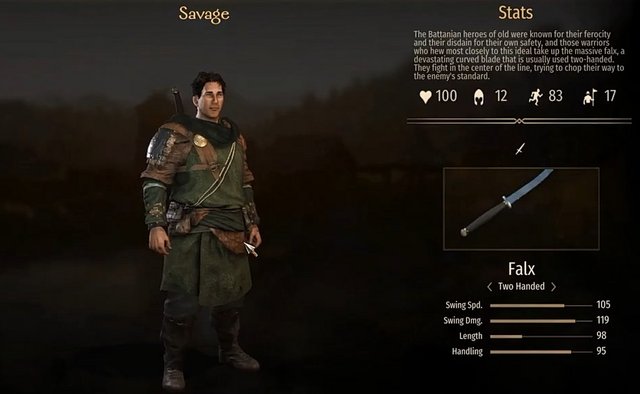 The unit is needed to support the infantry, which took the first blow on themselves. They play the second role or hold the second row, covering the archers. The best equipment in our opinion is the “Improved Armor”.

In the “Improved Armor” configuration, the infantryman has good armor of 32 points and standard health points of 100 points. There are 16 fighters in the squad. The main weapons are “Higlsnd Javelin”, which allow attacks to be made at short range. And the Ax, which deals 68 damage. For protective purposes there is a shield. 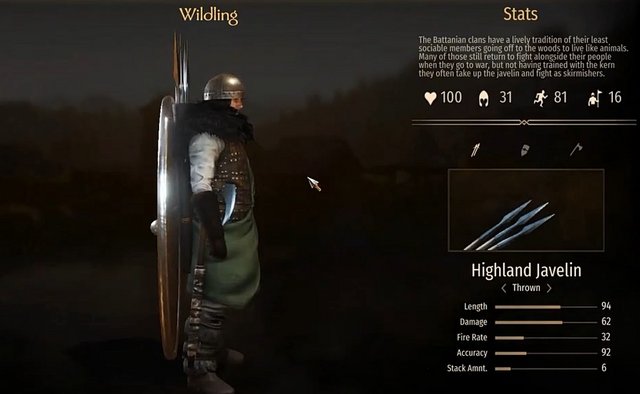 In general, this fighter is great at keeping the flank away from enemy infantry. Able to take on the first attacks and protect the ranged combatants behind them. For better use, they require cover from ranged fighters.

These fighters are best equipped with a set of “Long Spear”. So they will have protection indicators of 40 units with a health margin of 100 units. Armed with two weapons “Sword” and “Spear”. Sword deals one-time damage of 67. A “Spear” deals damage of 193 units and copes well with enemy equestrian fighters. There is also a “Shield”. 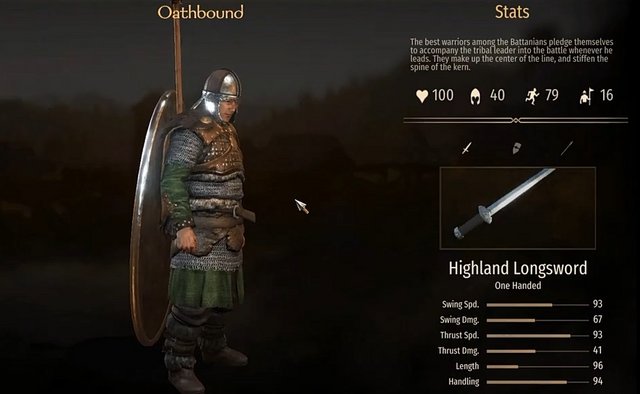 It resists enemy cavalry with weak armor. Better to keep in the front and second rows as support for ranged infantry.

Fiann Champion. It is considered the best ranged infantry.

According to its characteristics, it is more a universal fighter. But its main use is long-range combat. If the first flanks were broken, then the Fiann fighters can engage in close combat to fight almost on equal terms with the enemy infantry. 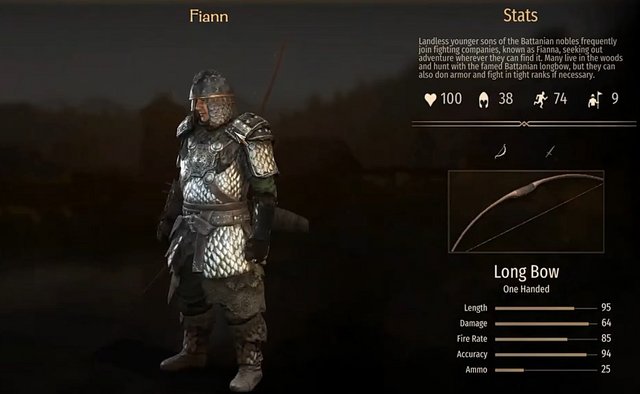 Fiann has 38 units of protection and a health reserve of 100 units. If the equipment is “Improved Armor”. A squad can have up to 9 fighters. “Bow” is able to inflict damage in 64 units and have a stock of arrows for 25 shots. There is also a melee weapon “Sword”, in one of the complete sets it can deal damage in 104 units.