Unique neutral enemy heroes “Guardians” (Bosses on the map).
As mentioned above, heroes can be equipped with artifacts. Each artifact has its own abilities, both active and passive. And if you manage to get artifacts, your hero gets an advantage on the battlefield and becomes stronger. A hero can be equipped with a maximum of two artifacts. And if you managed to get the third artifact, then you have to choose two of them. In total, the game has 9 artifacts, but the mission is given 3 artifacts, one for each “Guardian”. In each mission, one random artifact is dropped from the defeated Guardians.

If you want to become the owner of an artifact, you will have to defeat the “Guardians”. “Keepers” are peculiar barefoot, which are located in different places on the map. They are marked on the map with a special icon for quick search. Each of them has its own element and abilities with a large supply of health. If you attack only your hero, it will not be easy to defeat them.

There are three such bosses. Each of them is in different places on the map. And owns various elements, and also can use his abilities against the hero and the player’s army.
In total, there are 3 Guardians in the game:

HellRaisers is a demon that uses magical fire attacks and is completely immune to fire. Against it are any effects that reduce or block fire damage. As well as any effects that increase damage against demons. 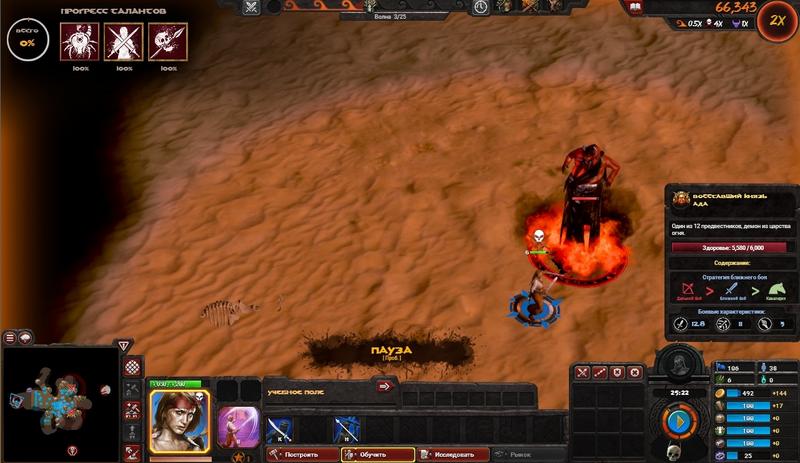 Having entered into battle with him, he begins to inflict damage in close combat. At the same time, he uses his abilities “Fireball” and “Ignites the earth with fire in a radius”. Melee troops who entered into battle with him receive a fire defeat and a fire effect. For some period, they take fire damage. The keeper of Risen Hell has 6,000 health. After the victory of the keeper of the Rising Hell Prince, you can get one of 3 artifacts that he can store.

“Bela Coin” is an artifact that gives a passive effect. If the hero is equipped with this artifact, then the enemies dying leave chests. Chests appear in killed enemy fighters only if they are next to the hero at the time of death. One chest gives 15 units of gold. In order to get this gold, the hero just needs to approach this chest. This artifact is more suitable for a melee hero, since the effect works in a small radius. 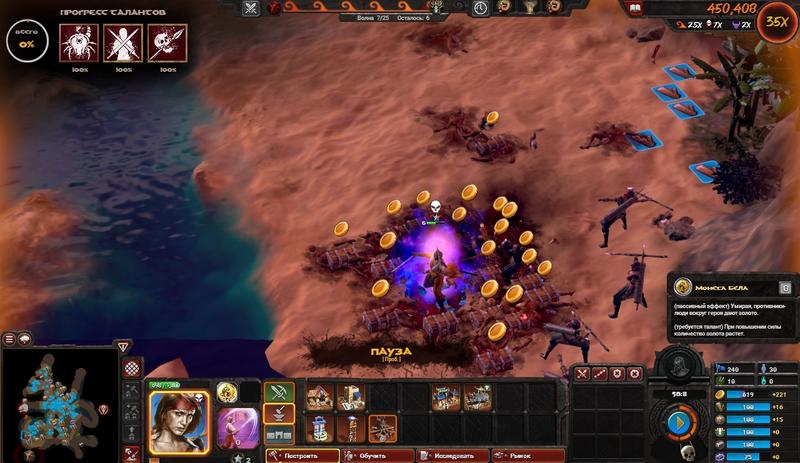 With increasing strength, the amount of gold from enemy fighters increases.

The Eye of Nakura is an active artifact. After its activation sweeps away enemies with witchcraft and tears souls out of their bodies. If it is possible to maintain the power of souls, then the hero temporarily becomes a collector of souls. But if storage is available.

If the power is increased, then the damage caused by the hero of the enemy army increases due to the power of souls.

“Mirror Tuzun Tuna” when activated creates a magical copy of the hero, which you can give orders. This spell slowly drains health from the hero. Copies cannot use activated effects or artifacts. 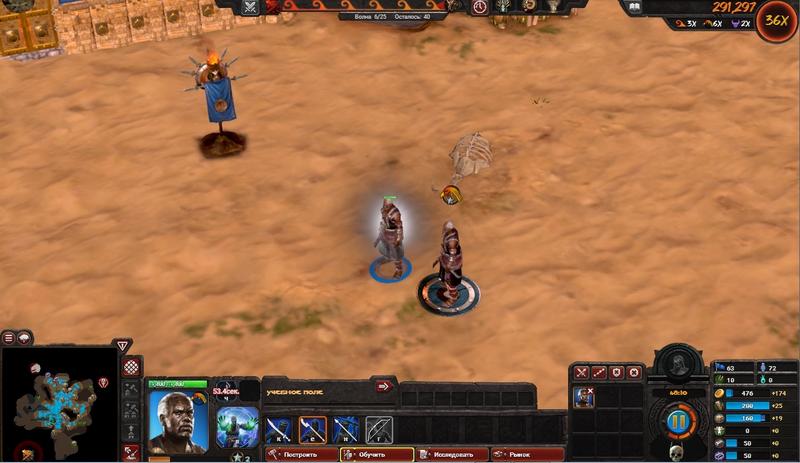 But if the strength is increased, then the mirror ceases to harm the hero. And the created copies live longer. A hero’s clone can also deal damage to enemies.

“Obsidian Basilisk” looks like a huge lizard. It has the ability to “turn people into stone” and “spits with acid.” The main attack claws, stomps and bites the attackers. While the stone statues are whole they can be cured by the “Priestess” with the improvement of “Herbalism”. The Obsidian Basilisk has 6,000 health. 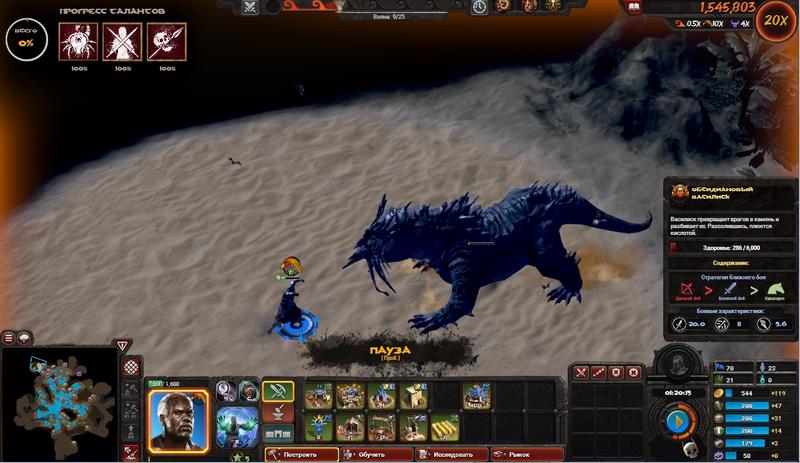 But in our case there were no such moments when the allied forces or the hero was turned into stone. But because of the ability to “Spit Acid” were not great difficulties. After “Spitting with Acid” a cloud forms in a large radius and can reach the long-range forces of the “Dart Throwers”. When a detachment enters the cloud, it receives a passive negative effect with poison. Then you have to return the troops to the base to replenish health.

– The Fang of Dagon.

Dagon’s Fang gives the owner of the artifact a passive effect. When enemy melee fighters attack the hero, they take poison damage.

If the strength is increased, then the poison becomes more dangerous and lasts longer.

“Wand of Set” is an active artifact. After use, summons 6 poisonous snakes that obey the hero. Summoned snakes can be controlled and they deal damage to the enemy army. 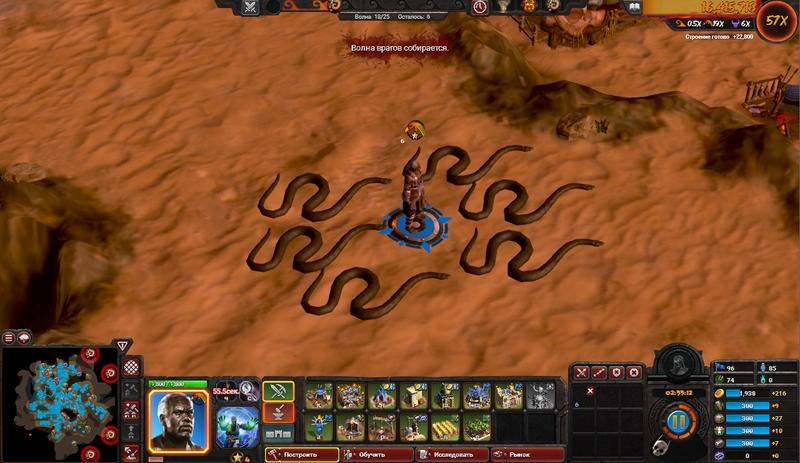 And if the strength is increased, then the snakes do more damage and the poison lasts longer.

The Mithra Star is an active artifact. When activated, it can heal allied forces in the circle of the hero. But the hero himself does not heal.

But if you increase the strength, then healing is accelerated and allows healing to act on the hero.

“Guardian Yota” is the guardian of the external gods. Owns the elements of magic and summoning. Has the ability to “Summon monsters” and “Summon items.” Major claw attacks. Keeper Iota has 6,000 health. 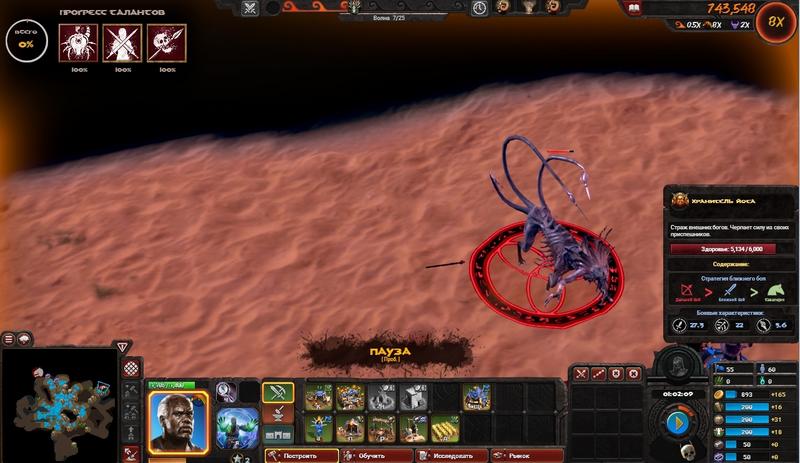 Entering the battle with the Guardian of Iota, he first inflicts melee attacks with his claws, and then conjures with magic. “Summon Monsters” on the battlefield do not appear a large number of skeletons of melee.

And summon the Crystal Iota item, which gradually heals the Guardian of Iota. After death, it explodes causing damage to everything except the Guardian. The crystal has 200 strength units. This crystal acts until it is destroyed.

After calling such a crystal, it is better to immediately switch to the destruction of the subject. Since if the item is not destroyed on time, the “Guardian of Iota” can completely restore his health. And of all the Guardians listed, the Guardian of Iota is the strongest in terms of what can heal wounds and attacks can become meaningless. And the player has to start over again.

“Guardian Iota” stores 3 artifacts, you can get one of three artifacts per mission:

Amulet of Ajujo is an activated effect. After activation, it invokes the energy of a necromancer, which sucks life from enemies and transfers it to the hero. Acts only on the hero. 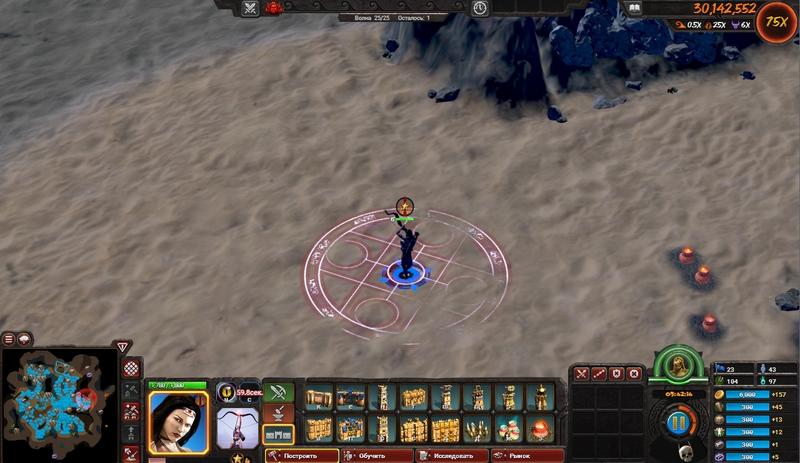 If the strength is increased, then the damage done and the healing speed increase.

The Nergal Stone is an artifact of passive action. If the hero has an artifact, then he gains immunity to the sea and poison.

And if you increase the strength, the artifact gives immunity to fire.

“Breath of Ymir” is an active artifact. When used, extinguishes a fire in a circle of action and does not allow to catch fire for another 10 seconds. 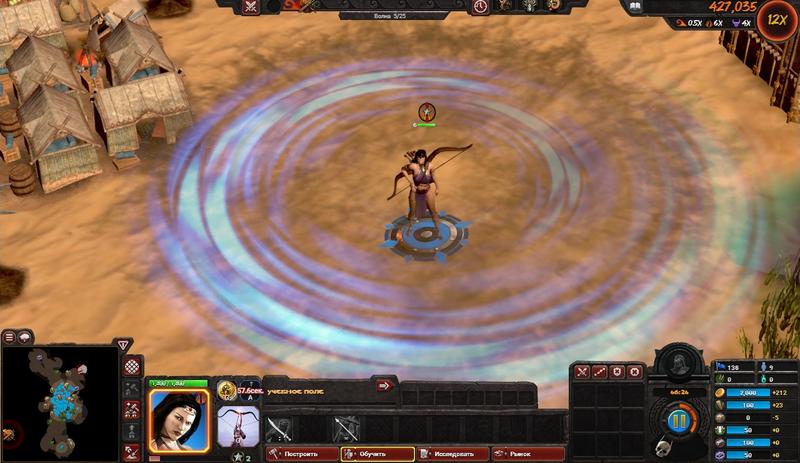 If the power is received then the “Breath of Ymir” becomes a rather useful artifact. When activated, it deals serious damage to enemies with cold in a good radius from the hero.