The French light tank Renault R35 is the most massive French light tank of World War II. Designed by order of the army to accompany the infantry in 1934. From 1936 to 1940, about 1,630 tanks were produced. During the development and creation of the Renault R35 tank, the French army was in limited funding, with not enough funds for all needs. And it should be noted that the tank was quite consistent with that time.

The history of the creation of the prototype of the tank. 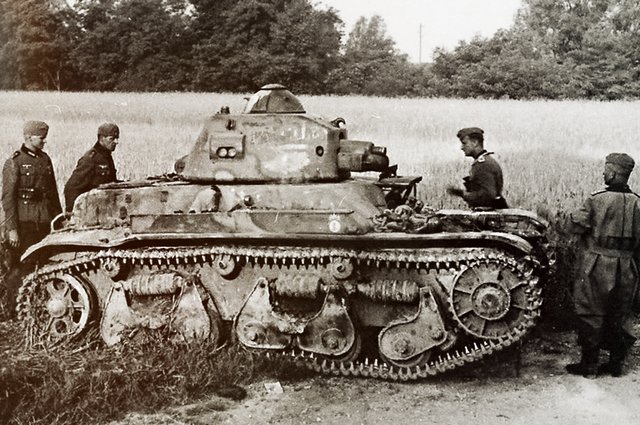 The creation of a new Renault R35 tank was planned as a replacement for the outdated FT-17 tank, which had to be improved in technical performance. first design work began around 1930 at the initiative of the Hotchkiss firm. Then these were just sketches, which the military liked and documents were prepared for the development of the tank on a competitive basis.

The technical tender documentation for the development of a new light tank had the following important points. The tank was supposed to weigh no more than 6 tons with a composition of 2 people. From weapons it was allowed to install two machine guns or a small-caliber cannon. In the part of the reservation, the armor must be more than 30 millimeters thick. At the same time, the speed of a tank with such requirements was allowed to be about 10 kilometers per hour. 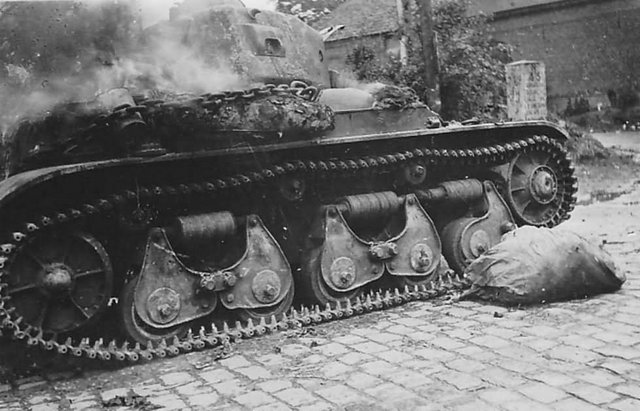 For some reason, the military set technical requirements for a new tank, which did not differ significantly from the previous FT-17 tank. The main differences were in terms of booking. The specified requirements for an armor thickness of 30 millimeters were subsequently changed to 40 millimeters.

As mentioned above, the military planned to use the tank to support the infantry. And the suppression of fortified firing positions held by enemy infantry. The main targets of the tank were infantry, so weapons were given the last place to resist enemy equipment. 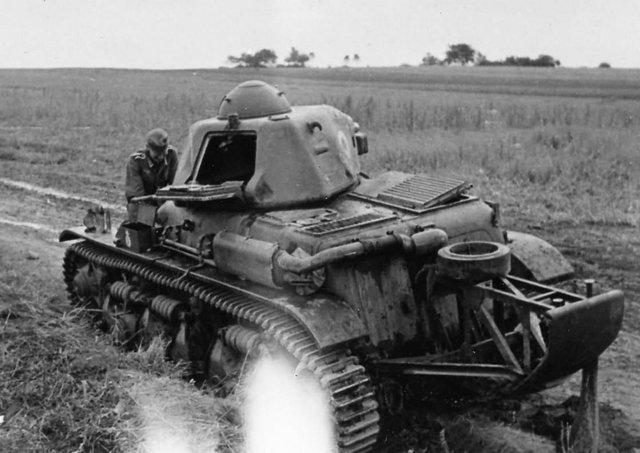 Results and winner of the competition for the development of the tank.

Applications from 14 manufacturers were accepted for the development of a new tank. After several evaluations, 7 campaigns were selected by 1934. But only 4 firms received orders for the development of prototypes. According to the results of the evaluation commission, a prototype of Renault was selected, which was submitted for testing on December 20, 1934. Under the pretext of correcting shortcomings. And already in 1935, the tank was adopted under the designation Renault R35, where the number 35 meant the year of creation.

The French army issued Renault’s R35 tank production campaign on April 29, 1935. In the first order there was a request for 300 units of military equipment. By 1939, the application had increased by approximately 1,800 units. Renault by 1939 managed to produce and arm the French army with approximately 975 units of Renault R35 tanks. 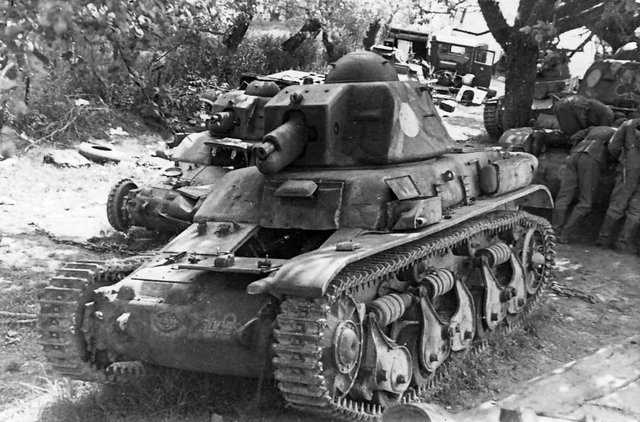 The hull of the French Renault R35 light tank is made of cast armor plates. It was assembled from homogeneous armor and attached to the frame with bolts. Thus, the body of the tank itself consisted of three parts, upper, stern and lower. All front cast armor had an alloy thickness of 40 millimeters, the aft cast armor was cast 32 millimeters. And the lower part consisted of armor of 10 millimeters of rolled armor plate and was welded to the body.

The tower is cast, with a rotating, but not reclining, commander’s cupola. The thickness of the turret armor also consisted of 40 millimeters in vertical projection. And the armor on the turret roof was 25 millimeters. Ventilation was provided in the tower itself in the form of a hatch. And a spare evacuation hatch in the bottom of the hull under the commander’s workplace. 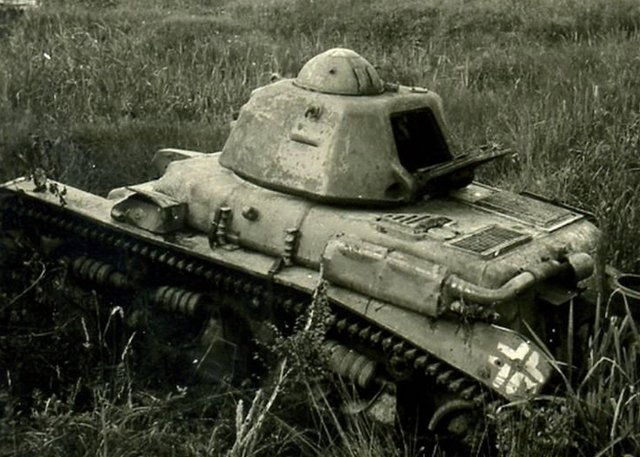 The engine and transmission are shifted to the starboard side. In 1938, a radio station was installed, the design of the mountings for the tower observation devices was changed.

The first Renault R35 tanks were armed with a 37 mm SA 18 cannon, which was installed and used by the FT-17 tanks.  coaxial machine gun of the 7.5 mm MAC 1931 machine gun could work in tandem with the cannon as an auxiliary weapon. The ammunition load was about 116 rounds. 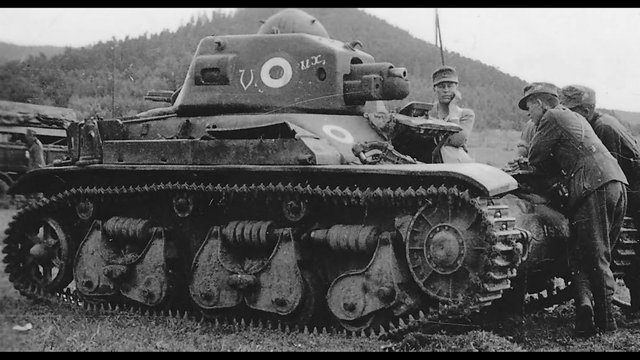 Application of the Renault R35 tank.

France surrendered to Germany on June 22, 1940. And all military equipment came under the control of the German army, including Renault R35 tanks in the amount of about 840 units. At the same time, the German military commission recognized the tank as not competitive. And unsuitable for conducting combat operations in the front lines. 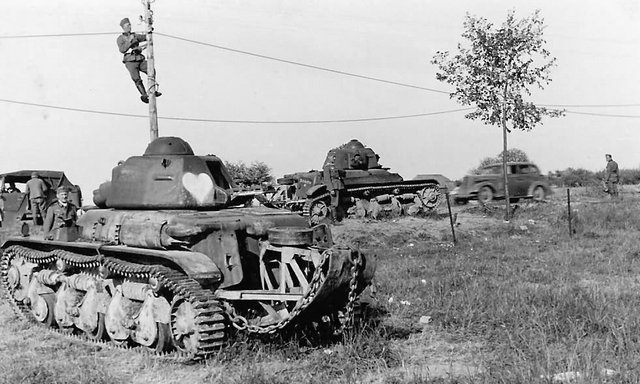 They were used on the secondary line and as self-propelled artillery units, tractors, as patrols and guarding occupied territories in the allied states.

In 1941 – 1942, 174 French R35 tanks were converted by the Germans into self-propelled guns with a 47 mm Czech anti-tank gun. Some of them, along with the linear R35s as part of the 21st Panzer Division (100th Panzer Brigade), took part in battles with the Allied forces in Normandy. 25 R35 tanks were used against partisans in Yugoslavia.

In the online game World Of Tanks.

In the online game World Of Tanks, the French light tank Renault R35 is at level 2. It is interesting to play on it, but difficult. For its class of light tanks, the Renault R35 looks more like a heavy tank due to its low speed and armor. It often happens that the armor is not penetrated, but it will take patience to enter the battle with enemy tanks, the speed is very low. 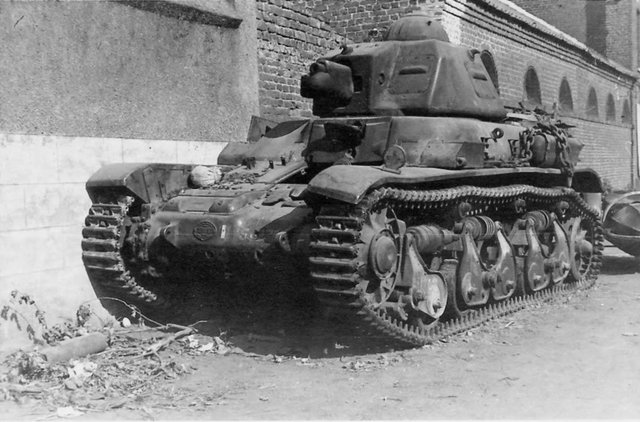 By the middle of the battle, allies and enemy tanks can be reduced to half by the time the tank reaches the desired firing position. At the same time, it will not be very advisable and not convenient to change the direction to another later.

The main and perhaps most important thing on the Renault R35 tank is to determine the direction and push the flank on a pair with your comrades. If the tank is on the top lines. So you can control at least some direction and restrain enemy tanks. 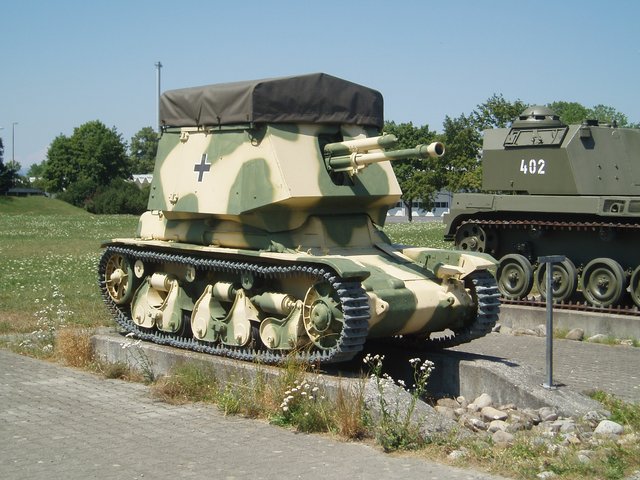 In another case, just decide on the flank and be on the second or third row. While strong allies are fighting with the same level, enemy tanks. And after a while, provide support.