The Soviet light tank BT-2 is a wheeled-tracked tank of the 1930s. The first tank in the line of Soviet BT light tanks. It was created on the basis of the American tank Christie M1931 (Model 1940), but differed from the prototype in numerous design features, as well as high speed and excellent dynamic qualities. In total, 620 cars of various modifications were produced. This machine, featuring a new engine and a new elliptical turret with a 45-mm gun, was called BT-5. A total of 1884 machines of this type were produced. BT-5 were delivered to Spain and along with BT-2 participated in the battles at Khalkhin Gol, the Polish campaign, the Soviet-Finnish and World War II. 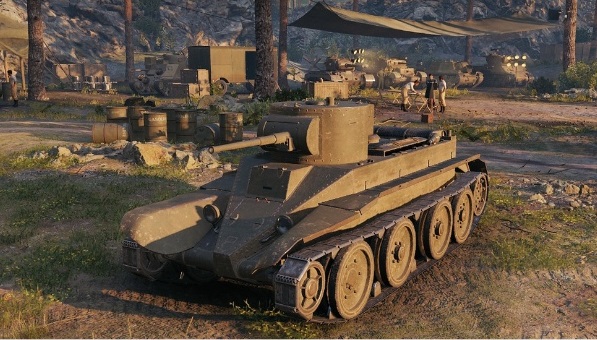 The beginning of the creation of the BT series tanks was facilitated by the arrival of the Soviet Commission in the United States of America to familiarize themselves with advanced models. The commission was interested in the tanks of the designer J.W. Christie, who specialized in the design of high-speed wheeled and tracked tanks. The Soviet Commission Christie proposed an improved tank M1940. As a result, on April 28, 1930, an agreement was signed providing for the sale of two USSR M1940 tanks with technical documentation and a production license.

March 14, 1931 began showing the tank to representatives of the Red Army command. The tank made a favorable impression. It was originally planned that the Yaroslavl Automobile Plant would be engaged in its production, but it quickly became clear that he could not afford the production of such a complex tank. At one time, it was planned to expand its production at the Bolshevik plant, but it was overloaded with orders, and the Kharkov steam locomotive plant, after canceling the order for the T-24, was free. As a result, they decided to produce BT in Kharkov. On May 23, 1931, the protocol of the Committee of Defense “On Tank Building” prescribed the introduction of the BT tank into the weapons system of the Red Army and the deployment of its production at the KhPZ. It was planned that the BT would be a “fighter tank”: acting in conjunction with the T-26, he had to defend it from enemy tanks.

In May – June 1931, Christie’s tanks were tested, according to the results of which a report was compiled, requiring the elimination of a number of defects and design improvements. This made it impossible to directly copy the tank, as originally planned. The tank tower generally still needed to be created. To refine the tank, a special design bureau was created under the leadership of N. Toskin.

The first 6 tanks were planned to be manufactured by November 7, 1931 to participate in parades. The production of the first samples was difficult, because the KhPZ management was not eager to develop a completely new and unfamiliar tank, offering to continue the production of the T-24. After making a number of decisions at the leadership level of the UMM and the government, it was very difficult to build 3 prototypes, 2 of which participated in the parade on November 7, 1931 in Moscow (a fire broke out in the engine compartment of the third tank). The leadership of the Red Army had doubts about the feasibility of producing a tank, but in the end it was decided to continue production.

In the online game world of tanks, the Soviet light tank BT – 2 is at level 2. It has high speed, but mediocre maneuverability. Weak armor and a long hull do not add vitality to this tank, however, due to speed, the tank captures and knocks down the base, moving from flank to flank is easy. With a power density of 42 hp / t, one of the most energy-armed tanks in the game.

The BT-2 Soviet light tank has good driving performance, as well as frontal armor, from which shells of semi-automatic guns will often ricochet. Ricochets happen more often from classmates and also light tanks. That is why the owner of this tank must understand that in front of him is one of the best “fireflies” from the line of Soviet tanks. So to claim a different role in the battle with vehicles of a higher level is not necessary.