The German tank Panther is one of the most famous tanks that took part in World War II. The reason for the creation of this war machine, which was not foreseen in the Wehrmacht’s tank weapons system, was the Soviet T 34 medium tank. On July 18, 1941, Rheinmetall received an order to develop a 75 mm long-barreled gun capable of piercing 140 mm armor at a distance of 1000 m. On November 25, Daimler Benz and MAN an order was issued for a 35 ton tank. The tactical technical requirements for the new combat vehicle were put forward by the following: width – up to 3150 mm, height – 2990 mm, engine with a power of 650 – 700 hp, armor protection – 40 mm, maximum speed – 55 km / h. The task received a conditional name – “Panther”. 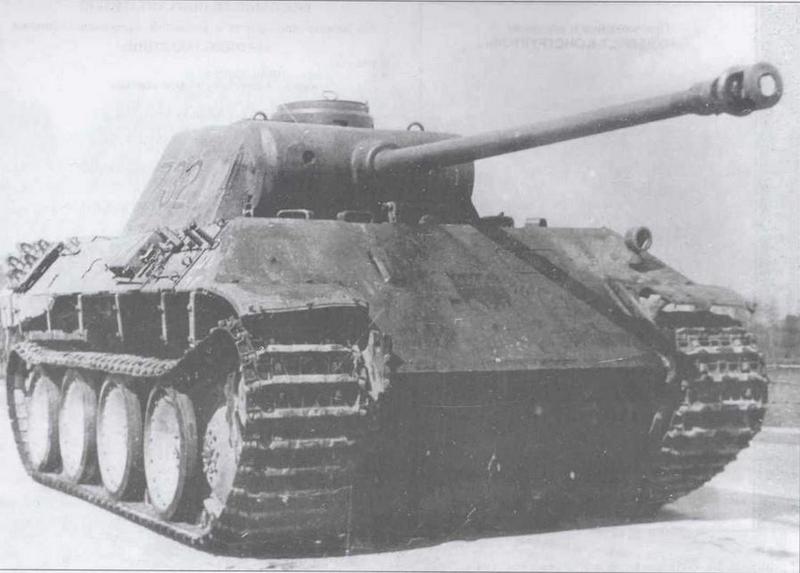 The original code name was set by designers as Pz.Kpfw.V. And the name of the Panther tank was introduced by order of Hitler on February 27, 1944. The first two tanks – V1 and V2 (V – Versuch – experience) were manufactured by September 1942, which differed from each other in insignificant details. On November 3, one of the cars, with a model instead of a real tower, was shown to Speer at a training ground in Bad Berka. During the tests revealed significant shortcomings in the chassis. It took time to eliminate them, and this delayed the start of mass production. The order also provided for the production of 250 tanks in a fairly short time – by May 12, 1943. In addition, Hitler received an unexpected order to arm the Panther with a 75 mm cannon with a barrel length of 100 calibers. This gun was not yet ready, and the Fuhrer’s instructions did not aggravate the difficulties with the start of mass production. 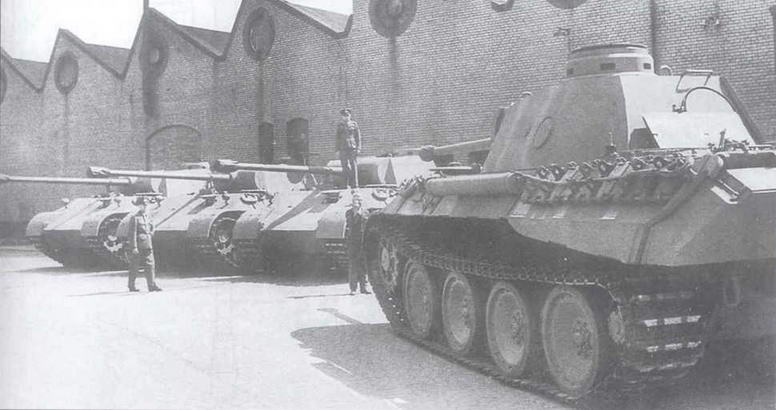 The first production Panther left the MAN factory on January 11, 1943. Tanks of the “zero” series (20 units) received the designation Ausf.A. They had nothing to do with the machines of the same name, produced since September 1943. A characteristic feature of the first production “panthers” was the commander’s cupola with a protrusion on the left side of the tower and a single-chamber muzzle brake of the gun. The tanks were equipped with Maybach HL 210P45 engines, Zahnradfabrik ZF7 gearbox and had frontal armor 60 mm thick. They were used only in the rear for the training of crews. Since February 1943, the designation of machines in this series has changed to Ausf.D.

The German tank Panther from the Pz.Kpfw.V Ausf.D series differed slightly from prototypes and vehicles of the “zero” series. The changes affected mainly the commander’s cupola and the muzzle brake of the gun. Increased the thickness of the frontal armor to 80 millimeters. The Maybach HL 230P30 engine and AK 7 200 type gearbox were installed on the tanks. The commander’s turret was similar to the turret of the Tiger tank on tanks manufactured in the first half of 1943.

Later, the commander’s cupola was replaced with a new one. The new turret had seven periscope surveillance devices along the perimeter and a special ring for installing the MG 34 anti-aircraft machine gun. NbK 39 mortars were mounted on the sides of the tower to launch 90 millimeter smoke grenades. The Panther tanks, which were produced in the second half of the year in armor design, were covered with zimmerite, as well as equipped with bulwarks made of 5 mm armor plates.

A characteristic feature of the D-series machines is the lack of a ball-mounted machine gun. This machine gun was located inside the tank and was inserted only into the narrow vertical slot for shooting, which was closed by a hinged lid. As well as the presence on the left side of the tower of a round hatch for ejecting spent cartridges and loopholes for firing personal weapons in the sides and aft of the tower.

The first batch of Panthers was planned to be manufactured by May 12, 1943. However, during February and March, the military did not accept most of the 77 units of manufactured tanks, and in April they did not accept any. By the end of May, the Wehrmacht received the long-awaited 324 Panthers. Adopted Panther tanks equipped the 10th tank brigade. After the introduction of new tanks into the tank, tankers had problems with the development of the complex binocular sight TZF12. So difficulties with the production and development of the first “panthers” in the troops affected the timing of the German summer offensive on the Eastern Front in 1943. 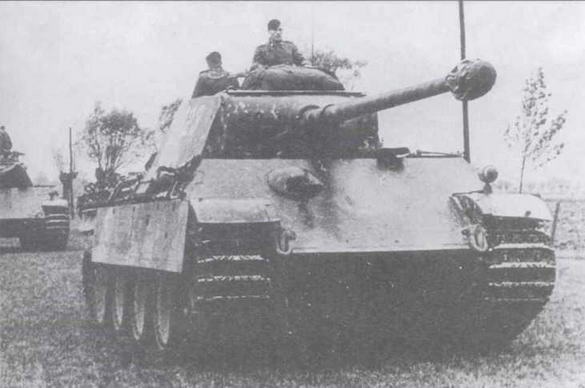 In September 1943, the release of the next modification of the Panther began – Ausf.A.
The following changes have been made:

The German tank Panther of the Ausf.G modification was the most massive of the three. 3740 tanks were made. Launch into mass production was introduced in March 1944.
https://i.postimg.cc/6Qd9HQKK/5.jpg
The new Ausf.G modification had the following features:

Experiments were conducted on the use of various engines on the Panther: MAN / Argus LD 220 with air cooling and a power of 700 hp. (515 kW), an aviation star-shaped BMW 132D with a power of 650 hp (478 kW), diesel Daimler Benz MV 507 with a capacity of 850 hp (625 kW).
New transmission options were also tested – hydrostatic and hydrodynamic, underwater driving equipment and track rollers with internal shock absorption. However, all these innovations have not found application on serial machines. The flamethrower version of the Panther remained unrealized. 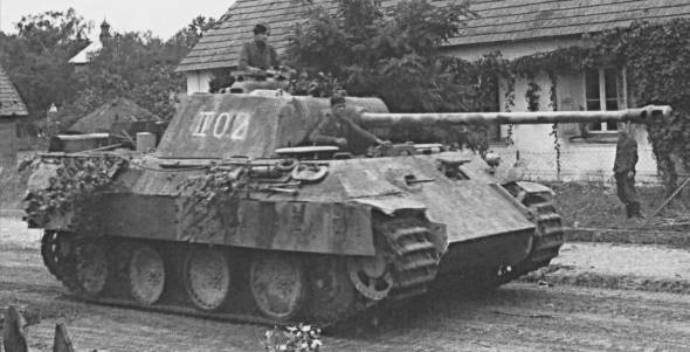 It was supposed to equip the car with a new turret with a 50 mm KwK 39 L / 60 cannon. This project was not accepted, since its weapons were considered insufficient, and linear tanks were used for reconnaissance purposes.

In 1943, the design of the next modification of the Panther Ausf.F. began. Which was significantly different from previous models. The most important innovation was the tower, called the Schmalturm. The tower was smaller than the standard and had a different design, which is why the tankers called it as a “cramped tower.” During 1944, several prototypes were manufactured and tested. And the design ended only in January 1945.
As a result, the tank received the following changes:

Until the end of the war, not a single prototype appeared in its finished form. In total, eight buildings and two towers were made for the Panther with the Ausf.F modification.