The Soviet KV-1C heavy tank was developed due to a number of shortcomings of the KV heavy tanks. In which the KV-1 heavy tank had no advantages over the T-34 medium tank. The KV-1 tank was inferior to the T-34 tanks in terms of armament, maneuverability and a complex and expensive design. 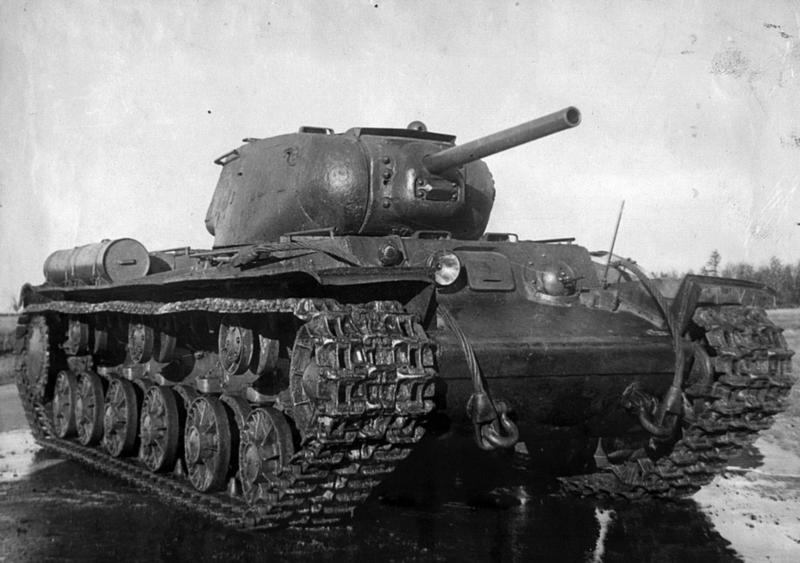 Soviet heavy tank “KV” had a number of disadvantages:

For these reasons, it was decided to develop and improve the KV-1 heavy tank, but with a more competitive advantage. The new modification “KV” was designated “KV-1C”. The letter “C” meant that the tank is fast.

From July 28 to August 26, two KV-1S passed state tests. Compared with the KV-1 tank, the thickness of the side armor of the hull was reduced to 60 mm on it. And the frontal plate of the turret box saved a thickness of 75 mm. A smaller tower was installed on a new design with a commander’s all-round turret. The transmission and driving characteristics of the tank were improved.

The Soviet KV-1C heavy tank was made on the basis of the KV-1 heavy tank. The main differences were the reduced thickness of the side sheets and the bottom sheets of the hull. The tank had a cast tower of a modified form. In this case, the crew could be placed in the tower. A more modern gearbox is also installed.

Formally, the production of KV-1C began in August. But produced tanks came out with old gearboxes. In the factory documentation they were called KV-1M. Moreover, some of them had an old running gear – track rollers and tracks. The mass of such tanks was 43-44 tons.

The release of full-fledged KV-1S began only in September 1942, when the Chelyabinsk Plant manufactured 180 heavy tanks. After which their release began to decline, and in August 1943 it stopped completely. In total, 1,083 tanks of this modification were produced, which were widely used on the fronts of World War II.

Based on the KV-1C, the SU-152 (KV-14) self-propelled artillery mount was developed and produced serially. And also a tank with a modification of the improved gun 85 mm and it was designated as “KV-85”.

The first KV-1C tanks began to arrive in regiments around November 1942. And they took part in the hostilities on the “Don Front” and “Kursk Bulge”. The tasks on the “Don Front” was the destruction of the encirclement of the German army near Stalingrad. At the end of January 1943, there were 3-4 combat tanks left in them that supported infantry divisions.

Also used in the summer company. The 6th Guards Tank Regiment of the breakthrough in May – June 1943, operated as part of the troops of the Northern – Caucasian Front.

Several regiments participated in the battle on Kursk. So, in the composition of the Central Front, there were 70 HF tanks. And as part of Voronezh 105 units of tanks. So the KV tanks did not make a significant contribution to the defeat of the enemy in the Battle of Kursk. The breakthrough of the so-called Mius Front in July – August 1943 was attended by the 1st Guards Tank Regiment of the breakthrough, which suffered heavy losses on the first day of the offensive: up to 50% of combat vehicles — two KV tanks burned down.

The last guards tank regiment of the breakthrough was formed in January 1944, and by autumn all of the KV-1C regiments were disbanded or reorganized into heavy guards tank regiments that received IS tanks.
In the online game world of tanks, the Soviet heavy tank KV-1C is at level 5. The tank is good for its level, but playing with higher-level tanks is not easy. And a big contribution to the battle is unlikely.

The Soviet KV-1C heavy tank has mobility and not bad rebound armor from the KV-1. The player has a choice of 122 mm S-41 HEs with poor accuracy and a long mixing time, but a large one-time damage. And an 85 mm gun with good penetration and one-time damage.

In the top, this TT can safely cooperate with heavy tanks, confidently pushing the direction or restraining it. Thanks to the speed, the KV-1C can go behind the enemy lines, shoot down the base grab, or simply change direction if necessary to support another flank.

At the bottom of the list is to act along with medium tanks. Or play as a support tank and cover allied heavy tanks at medium range. You need to play KV-1C carefully, as in fact it is half the medium and heavy tank.