Hello dear friends! On June 22, 2021, the developers delighted the players with a new story in the vastness of Seas of Thieves. In this story, players have to go in search of the legendary Jack Sparrow and the powerful treasures that Jack once stole. In the process of passing, players will have to solve complex secrets and riddles in order to learn and discover new secrets. 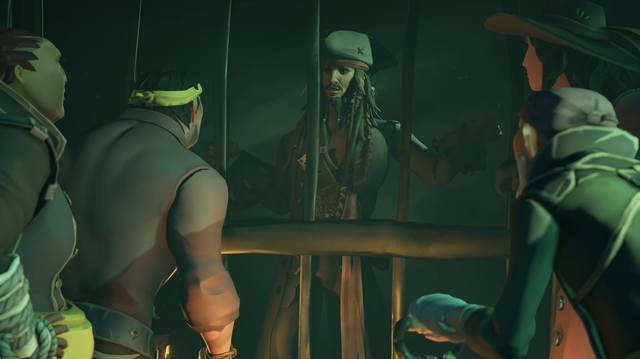 On the way to success and the search for mysterious treasures, players will fight side by side with Jack Sparrow, against the famous Devi Jones. In some cases, the story will allow you to take a different look at the movie “Pirates of the Caribbean”. The new tall tales unlocks 5 tasks with their own difficulties and secrets. 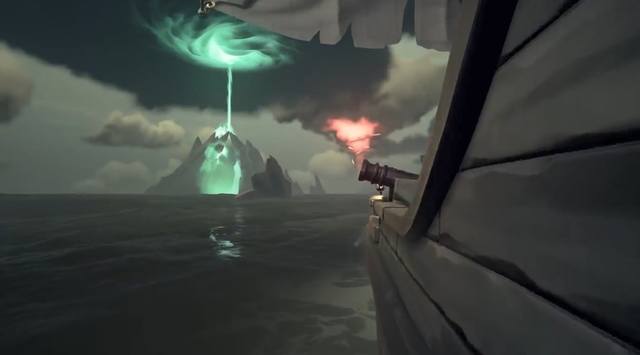 So, going to the Tall Tales story in the game interface, you need to select a chapter to play. After that, go to the character for the first dialogue and receive introductory information, which will open a portal to another world.

This portal opens in the rocks, not far from the pier, you can find it by the green color of the clouds and the glowing beam in the sky. You need to swim directly into the open portal, after passing through it, the whole sky and the environment will be green fog. The map in the captain’s cabin on the ship is not available, and the ship itself is sailing under its own power. You won’t even be able to jump into the sea where you can see the stars.

After a while, the souls of other pirates, who once ventured on this journey, will float to meet the ship. They will not attack our hero and his ship, they will just sail in their direction. And then you can see the ships of the ghosts, which will sail in their directions. Even when shots are fired at them, nothing will happen. while the shells themselves scatter in the air without hitting the target.

Having landed on the island, you need to look for a passage to the cave. The wreckage from the ship will help to find the passage. At the entrance to the cave there will be a statue of a skeleton with a bell in his right hand. After passing into the cave, torches will be lit with green fire and a fire, which is located in the middle of this location. 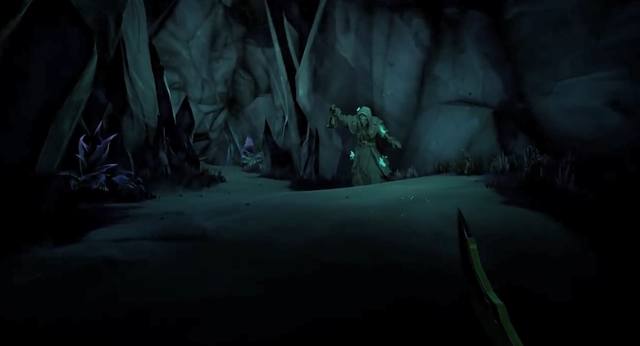 Our hero needs to open the doors to go further. To do this, you first need to light your lantern from the fire. After that, you need to spread the resulting fire to the lanterns, which are holding skeletons in their hands. When the gate opens, a new location will appear with skeletons holding lanterns, you also need to light their lanterns. There are only three lanterns, the last one is on a broken boat. 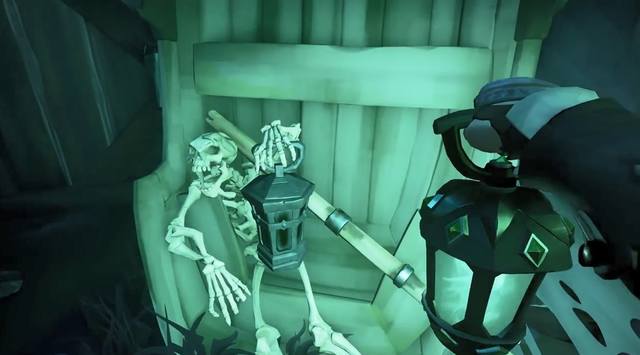 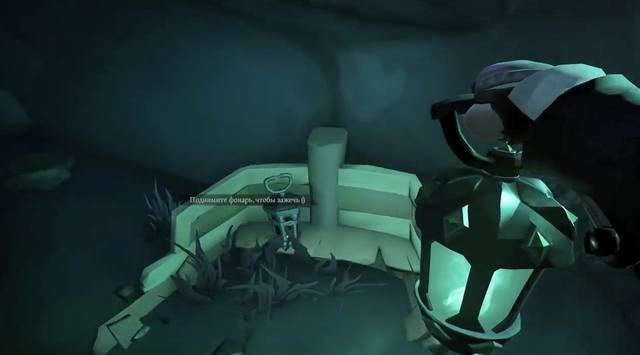 Walking along the road, we observe the stories of former pirates who are told to us by ghosts. Some of them stand on the ship, others dance and sing songs. Proceeding further we meet a group of ghosts who are resting, after a while they organize a riot among themselves. In this location, we will need to find a passage under the waterfall in the rock. Find the skeleton in the boat, which is on the right side of the boat, we take the “Oar Handle” from it. 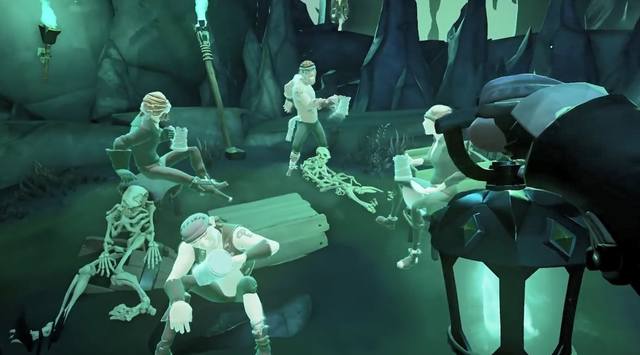 Found “Oar Handle” will help to fix the doors and will serve as a lever. Having installed the handle in the right place, you can safely pull the lever and the doors will open. The further path will be indicated by the ghosts of the former pirates, you will have to jump over the rocks to reach the pier. Once on the pier, you need to light a lantern and then a boat with ghosts of pirates will appear. After that, you can go to open the way to a new location. 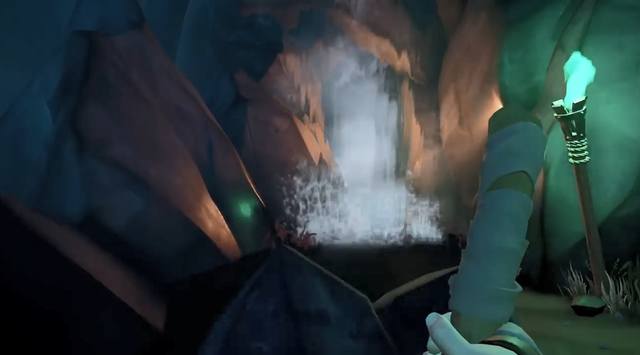 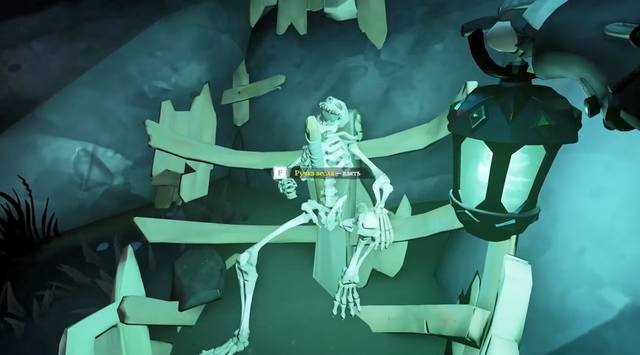 In order to go further, you need to raise the anchor and lower the bridge. After crossing the bridge, pull the rope to raise another bridge and go further. We go along the path to the very end and light another lantern. After that, the very ghosts of pirates that we saw before will sail to the pier, and then the bridge is lowered. 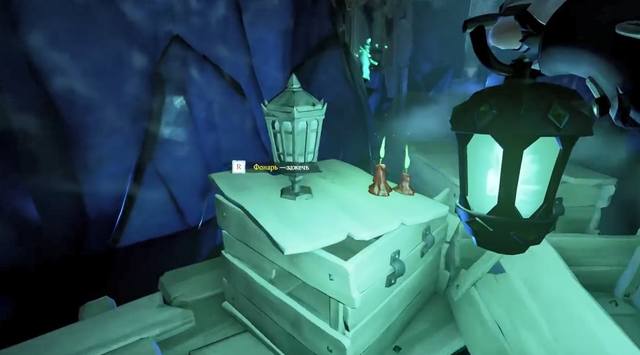 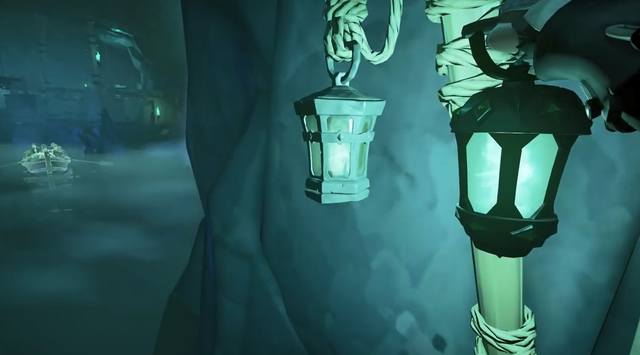 Having reached the location with a mountain of gold, we will see our old acquaintances who rejoiced in their condition. And for some reason they died after they brought the last gold to this place. In this location, you need to be more careful and find a passage behind the mountain of gold, which makes it possible to go further to the top. 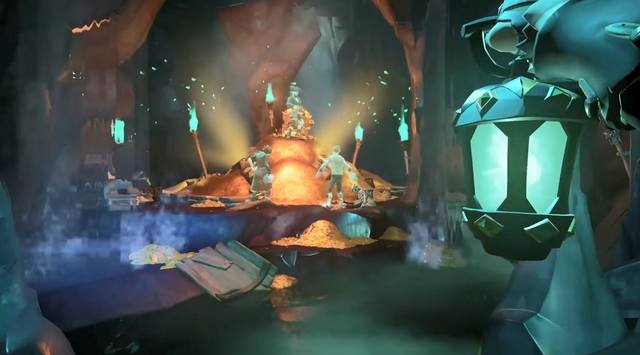 After going to a location with a cliff and a staircase to the upper floor. You will need to select a weapon from the arsenal and cut the rope with a sword. After that, the missing part of the bridge will fall and open the passage further. We jump over the obstacles and exit the cave. Not far from the gate, you will need to light a fire, which will open the way further. 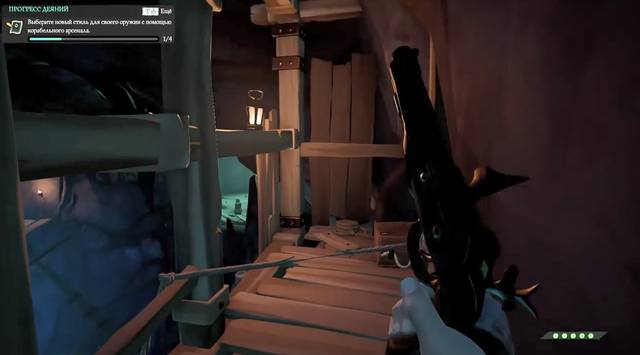 The second part of the “Story of the Dead”, Sea of ​​Thieves tall tales “The Life of a Pirate”.

In the new location, the hero needs to look for control levers for elevators and lifting devices that open the passage. Moving over and jumping over obstacles, you need to find a cage that hangs at the top of the mast. This cage must be thrown to the ground. To do this, you can use a sword or lantern to cut off the rope that holds the cage.

After the deflated cell, you need to look for a destroyed ship, in which there is a tavern. We pass the tavern to the captain’s cabin, where you will need to light a candle. Only after that will the souls of the pirates appear and will look at the court and show the right place. 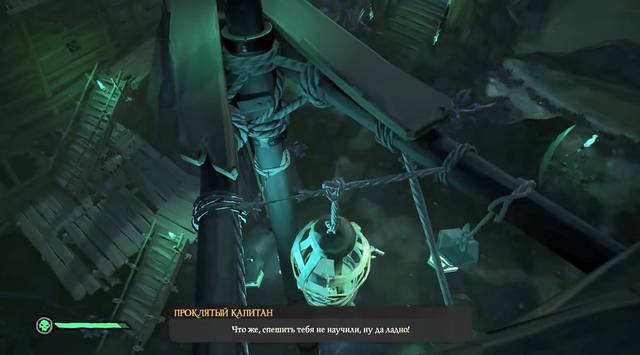 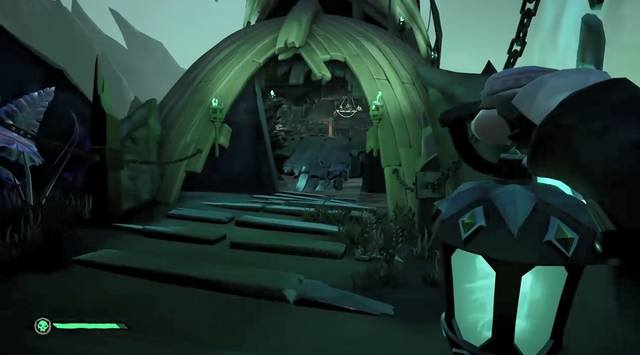 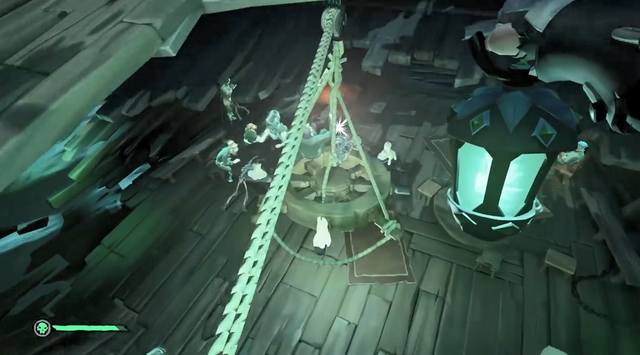 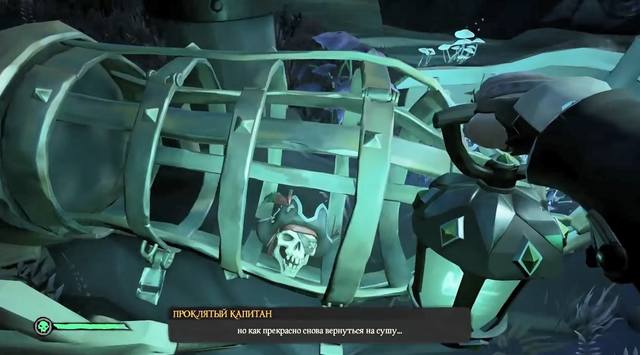 Climbing to the top of the “Lighthouse” “Skull” will tell its story. And then he will give valuable advice on how you can use it. First you need to find the body of a skeleton without a head, on which you need to install the “Skull”. Installed “Skull” in place of the body of the skeleton will begin to tell the story that took place around the skeleton. 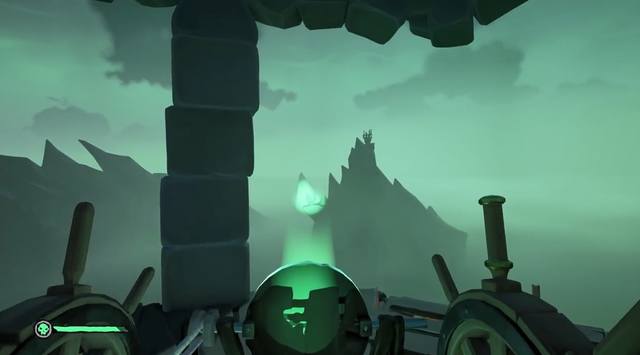 From the “Skull” we will receive a task in which we need to find a way to light the lantern on the “Lighthouse”. In this case, the beam of a lighted lantern must be directed into the sea. To turn on the “Lighthouse” you need to light a fire with your “Lantern”. In this case, the beam of light from the fire must be directed into the sea, as the head of the “Skull” said. Controlling a structure with a lens, you need to set fire to large “Torches” standing on the mountains with a beam. After that, the task from the “Skull” will be completed and the next part of the chapter will begin. 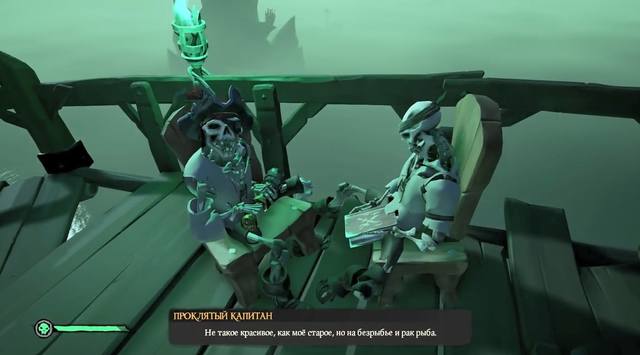 So we managed to light all the big torches on the mountains. The fog will dissipate on the horizon and a ghost ship will appear, about which the “Skull” will call it “The ferry ship”. After that, he will open a book with a secret secret, which contains the key to his cabin on the ship with red sails. 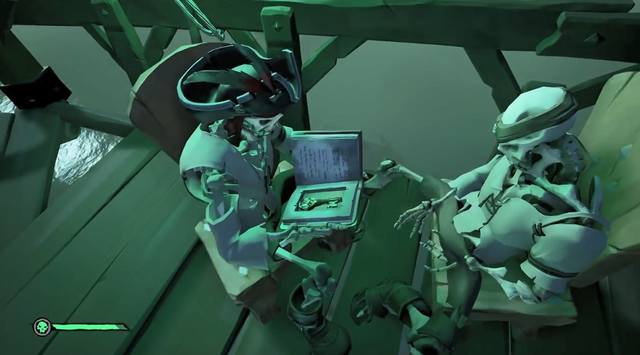 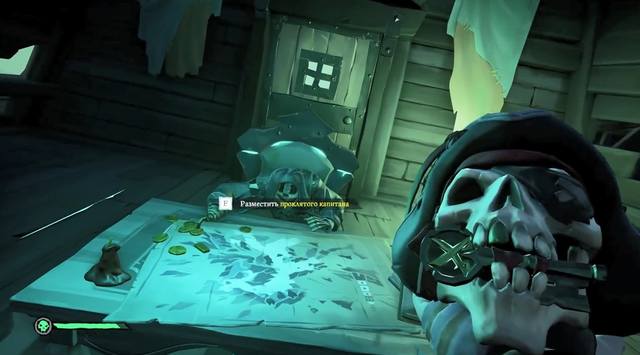 We take out the head of the skeleton, with the key in its teeth and head to the ship with red sails. Upon arrival at the ship “Skull” will ask you to install it on the skeleton near the door. After that, he will open the locked door, using a secret lever, pulling the lantern. It is necessary to climb to the top of the captain’s cabin and return the “Skull” to its real skeleton. And then he will give the “Key to his treasury”, which is located behind his back. 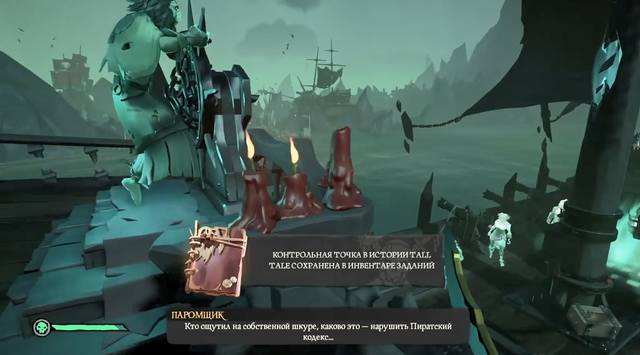 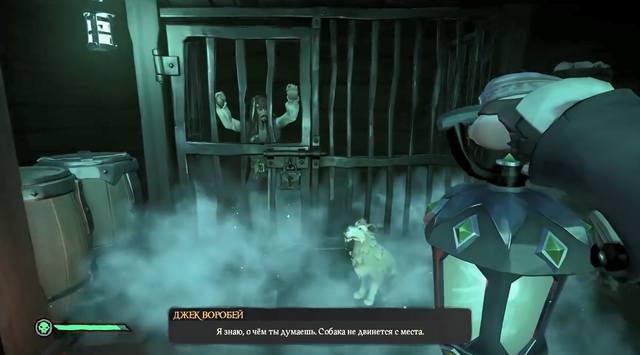 Going down to the lowest deck, we find the very legendary Jack Sparrow sitting in a cage. The key to the cage is in the teeth of the dog, which gives the keys without any problems. We open the cell and the next part begins.

Having risen to the deck with Jack Sparrow, a naval battle with the “Flying Dutchman” ship will begin almost immediately. It is advisable to try to aim at the cannon holes. But the main opponents of our hero will appear on the deck, jump out of the sea. These are new enemy fighters in the open spaces of the “Sea of ​​Thieves”. After defeating several waves, Jack Sparrow will disappear.

It is better to try to hit the biggest enemy with a ranged weapon. It is slow, but strong, and when shooting from a distance, problematic moments will not occur. On the last wave, a creature will appear that strikes with lightning when attacking in melee. 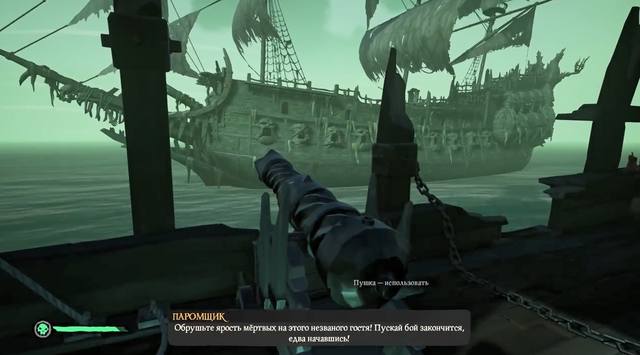 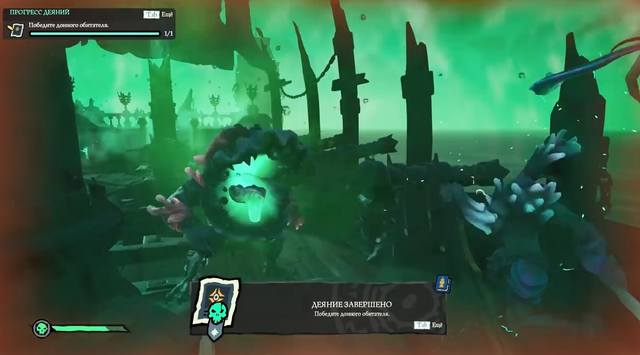 After the battle, the “Ferryman” will send our hero back to the ship. Returning to our ship, we will see several more such ships that return back from where they came. To open a portal to the living world, you need to ring the bell. That’s all, the story is over. 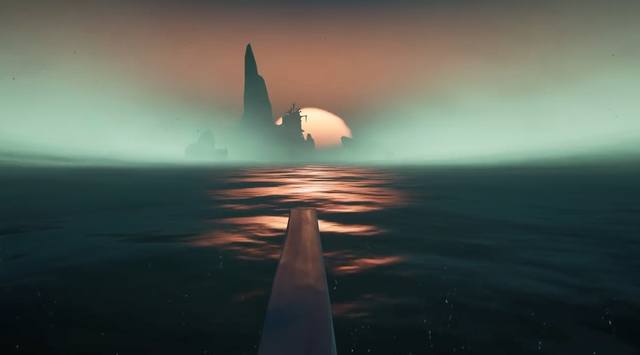